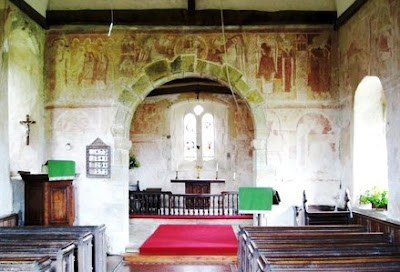 This tiny, whitewashed church is tucked away just a few miles south of Pulborough, is one of Sussex's oldest and most fascinating.

Dating from the 11th Century (claimed to be 1050 AD), this Saxon foundation contains Roman tiles in its walls, presumably re-used form the earlier Roman settlement sited in the area. The windows are, for the most part, of the Saxon or early Norman style, very narrow and with rounded heads.

But the real reason for a visit is that Hardham contains what may be England's earliest mediaeval wall paintings, and certainly one of the most complete decorative schemes to survive. Dating from shortly after 1100 AD, they are in amazing condition for their age, with vivid colours. They cover every wall. 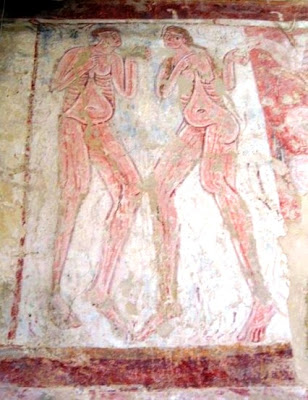 The subjects include an oddly anatomical Adam and Eve (above), the Annunciation, scenes from the life of Christ, and St George (in classic 11th century armour, riding a fine white charger) killing the Dragon.

Hardham has a regular church service at 11am on Sundays, but it is often open in the daytime for visitors. (Hooray!).

To get there head south out of Pulborough on the A29 towards Arundle. Slow down and prepare to turn left as soon as you pass the sign telling you that you are entering Hardham: the turn is not signposted in advance, and appears like a track, although you can see some half-timbered houses in the distance. The church is half way along this lane, and will amply reward a half hour of anyone's time.
Posted by David J at 13:19