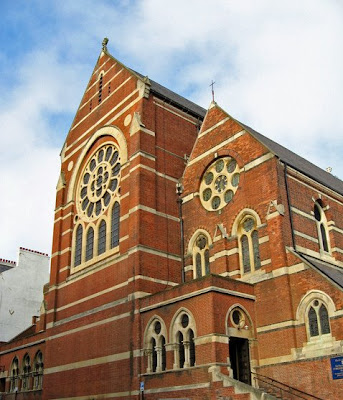 St Michael's is a surprise: tucked away amongst the terraces in the fashionable Clifton area of Brighton, this large church seems almost out of place, its gothic red-brick contrasting with its white-stuccoed neighbours. It has earned it the epithet 'The Cathedral of the Back Streets'.

It is only by looking up that you begin to realise just how big a building this is. That's partly because it is actually two churches in one, both built by renowned Victorian architects. The first was built by G F Bodley in 1861-62, and now forms the south aisle of the church. The interior features painted ceilings, tiled floors and polychromatic brick decoration. But the real joy of this part of the church is its Pre-raphaelite stained glass windows, by Burne-Jones, Webb, Maddox-Brown, Gabriel Rossetti and William Morris. A stronger artistic pedigree from the 19th century would be hard to find.

In 1893, work began on an extension by William Burges, with sculpture by Thomas Nicholls, which dwarfed the earlier building and became the main body of the church. This is in the French gothic style, on a cathedral-like scale, with an interior in stone rather than brick. The windows here are by Kempe, and there are other furnishings by Burges and Nicholls. But it is the sheer scale that makes this part special.

The church is well worth a detour from the bustle of Brighton, in the streets below. As well as for services, the church can accommodate small groups for tours (arranged in advance). The church has recently become accessible for wheel-chair users.