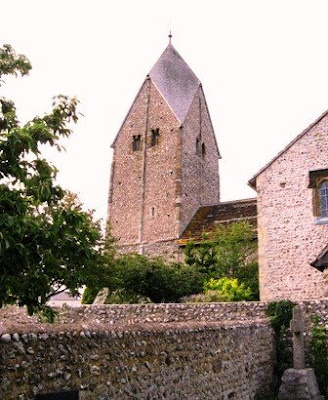 The church of St Mary, Sompting, is well known as one of the best-preserved Anglo-Saxon churches in England.

Thought to date from about 960 AD, it is also mentioned in the Domesday book. The principal - and most distinctive - feature is the Anglo-Saxon tower, capped by a diamond-shaped roof, known as a 'Rhenish Helm' or 'Rhineland Helmet'. This is the only one of its type remaining in Britain, and makes a striking sight across the fields from the nearby A27. The lower stage may date from before 1000AD, and may have been the west part of the nave. The second stage added some time around 1050. Inside, the base of the tower contains an Anglo-Saxon arch, with interestingly carved capitals, decorated with a primitive form of scroll and leaf motif, showing classical influences.

The remainder of the church dates from a rebuilding some time after 1154, when it was given to the Knight's Templars. The style is late Norman (Romanesque) and appears to have been based on the original Anglo-Saxon plan, with the addition of the present north and south transepts. The capitals of the columns under the later arches are interesting in themselves, demonstrating different sculptural motifs from the 12th century. There are also some interesting fragments of relief carving, dated to around the same period, one of which shows a cleric reading from a book, with oddly stylised facial features.

Access to Church Lane from the A27 is restricted to the eastbound-carriageway only, but this busy dual-carriageway is all too close and mars what would otherwise be a lovely place.