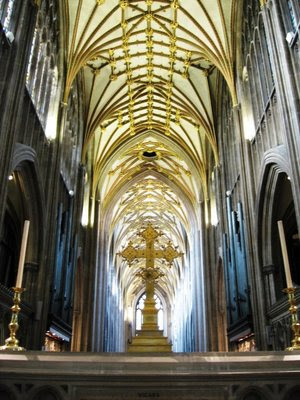 In 1574, no less a person than Queen Elizabeth I is reputed to have declared this church to be the "fairest, goodliest and most famous parish church in England." Who can argue with that?

St Mary's owes its existence to the merchants who made Bristol a major mediaeval trading centre. Here, wines from France, sherry from Spain and port from Portugal were imported. Later, it was a major port for the New world, with tobacco and - less happily - the slave trade adding to its wealth.

Although begun in the 12th century, the merchants paid for the church to be rebuilt in the Perpendicular Gothic style in the 15th century, delivering a series of lofty stone vaults, filled with light from huge panel windows. Even the transepts have vaulted aisles. The result is a church of larger and more impressive proportions than many a cathedral.

Seen from outside, the tower (at 292ft, the second highest parish tower in England) soars among the modern offices that surround it. The double porch, dating from the mid-14th century, is a marvel of Decorated Gothic architecture. The outer porch, with its seven-pointed arch, has a distinctly Moorish feel, doubtless reflecting the travels of its benefactors abroad.

Besides the architecture, the interior also has much of interest, particularly the various tombs, brasses and memorials. These include a number connected with the New World: Sir William Penn, father of the founder of Pennsylvania is buried here; and a whalebone, presented by John Cabot, after returning from his voyage to Newfoundland in 1497, hangs on a wall. Part of its glory is found by looking upwards: the roof contains over 1,200 decorated bosses where the ribs cross and intersect.

The church has a cafe in the crypt, open 10am-4pm, serving snacks and lunches. Music is also important to the church, whose impressive choir produces its own CDs. The website has German, French and Dutch language versions.