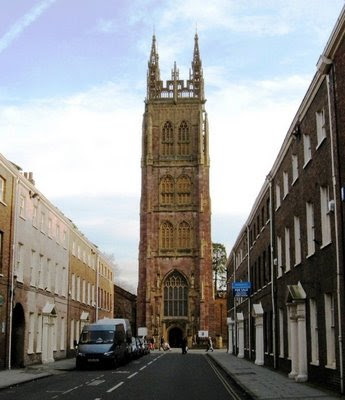 The ancient County Town of Somerset has a church worthy of its status and history, famous for its splendid tower, which is a landmark for miles around.

The early history of the church is obscure: Taunton was the home of a great Augustinian Priory under the control of the Bishops of Winchester, who were also Lords of the Manor until the 19th century. The town that grew up alongside the castle and Priory looked to the Priory for many of its spiritual needs, but the townspeople probably had their own church on the present site from at least the 11th century onwards.

However, the first recorded mention of the church is in the 13th century, and foundations of that age have been found during various archaeological excavations. In 1308 the church became independent of the Priory, and over the next two hundred years was rebuilt into the form we see to-day.

From the outside – and particularly from the perfect view between the Georgian houses of Hammet Street – the dominant feature is its tower. Somerset is famed for its huge towers, built in the 15th and early 16th centuries on the wealth that came from the wool trade. They are divided into the Wells group, with vertical emphasis, and the Taunton group, with horizontal emphasis.

Unsurprisingly, St Mary’s belongs to the latter group, and is the grandest by far. At 163ft, (50m) it can be seen for miles. It is built in a striking red sandstone, with window openings and tracery in golden Ham stone. Constructed in 1514, the present tower is actually a copy (albeit an exact one using much of the original materials) completed in 1862, after the original became unsafe.

The other external feature is the generous south porch, dating from 1508, and decorated with elaborate niches, although the statues are Victorian replacements for those destroyed in the Reformation. Indeed, much of the decoration in the church had to be replaced, following extensive damage during the Commonwealth period – Taunton was a staunch Puritan town.

The interior is splendid – the plan is almost square, thanks to its generous double aisles, giving the impression of a forest of columns. The oldest elements are the arcade arches at the east end of the nave, which date from the late 13th century. Otherwise, most of the fabric dates from the 14th and 15th centuries. Of particular note is the 15th century carved wooden roof, with its gilded angels – a Somerset tradition. There are more angels carved on the nave capitals and corbels.

Although most of the furnishings are Victorian, there are some attractive memorials: on the north wall, an almost life-size statue of Robert Graye, (1570-1635), flanked by columns and topped with a arched pediment, recalls a famous son of Taunton and a generous benefactor, who built almshouses for the poor in East Street, which are still in use to-day. The windows in the north aisle contain fragments of brightly coloured mediaeval glass.

Another benefactor was Richard Huish, (d. 1615), and his plainer but still attractive memorial is found on the South wall. At the west end of the inner aisle, is a stone memorial to Thomas More, (d. 1576), second owner of the Priory following the Dissolution. To-day it provides the backdrop to the small shop, selling cards and fairly traded items. Opposite, in the North Aisle, is a small but lively café, apparently catering to a regular group of pensioners.

Finally, this church has a personal connection, which makes it especially interesting to me: my Great-Great-Great Grandfather and Grandmother were married here, in July 1828.