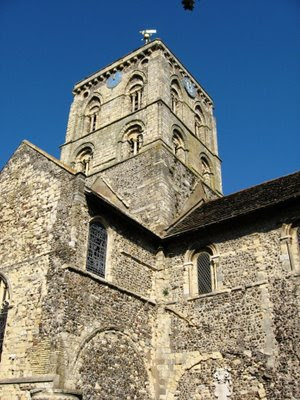 Shoreham has two churches, both ancient. New Shoreham, as its name implies, is the younger of the two. But the moniker 'New’ belies the fact that the church is over 900 years old, founded in 1103 by a Knight returning to England from the first crusade. Unusually dedicated to 'St Mary de Haura’ (St Mary of the harbour), this is a landmark church: from a distance, it looks like a Cathedral, its tower rising confidently above the town's rooftops.

Closer inspection reveals that half the church has disappeared, however: the original Nave became a ruin when New Shoreham’s economy declined, and was demolished in the 17th century. What is left is the crossing and chancel, but this is still impressive.
The lower part of the tower and transepts date from the original church, and are formed in true Norman (Romanesque) style. The Chancel was rebuilt around 1180, and demonstrates beautifully the transition from Romanesque to Gothic: the north aisle columns are rounded and octagonal in the Norman style, supporting arches with the slightest of points. In contrast, the south aisle is fully formed Early Gothic. For such a small town, this is an exceptional piece of architecture. Other items of interest include the original Norman font, two lovely 15th century floor brasses and - just to demonstrate that it’s not a new problem - a quantity of 17th century graffiti carved into the stone-work.
The church is a venue for regular choir concerts and for events during the Adur festival, including an impressive flower festival. There is more information on the church’s excellent web-site.