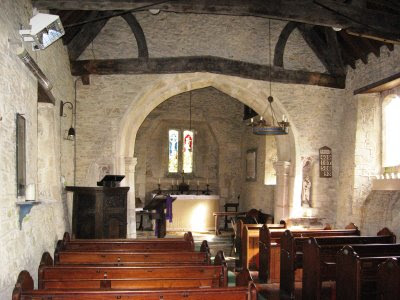 Noke is a little cul-de-sac of a village on the edge of Otmoor, north of Oxford. Recorded in the Domesday Book, it is named after the area’s oak trees – Noke means ‘by the Oak’. It is a quiet and peaceful place, strung out along its single lane and surrounded by rich farmland.

St Giles' church stands at the centre of the village, and is said to date from before Domesday, although the present building dates from around 1270; the list of rectors begins in 1272. The building consists of a small nave and chancel, and is essentially in the Early English Gothic style, but like so many small churches bears witness to repairs and alterations through the years.

The interior is absolutely charming: 'rustic and homely' is how Pevsner describes it, and I see no point in trying to better his description. The small nave has a heavily braced roof, probably rebuilt in Elizabethan times, and 14th century niches either side of the wide, low chancel arch, which, along with most of the rest of the fabric, is probably mid-13th century. There is a colourful painted organ at the west end, next to which is the font, which is said to have been given as a gift by Princess Gundreda, youngest daughter of William the Conqueror. Its lead lining is dated 1773. The single lancet west window contains attractive modern glass, depicting three poppies, commemorating the 50th anniversary of the end of World War II. At the chancel end, is a dark wood Jacobean pulpit, beneath an hour-glass stand – doubtless to time the length of sermons!

The chancel contains a brass dedicated to Joan Bradshaw, (d. 1598/9), depicting herself, her two husbands and eight children. There are also memorials to her grandson Benedict Winchcombe (d. 1623) and the remains of an effigy, originally part of Benedict’s monument, erected by his

nephew, Benedict Hall. This stood in a mortuary chapel on the north side; allowed by Benedict Hall’s descendants to fall into disrepair, the chapel was pulled down in 1745 to prevent it endangering the chancel. Although the brass and memorial tablets were saved, the monument was not: the remains of his Uncle’s effigy (in Jacobean costume) was allegedly used by local children for target practice, throwing stones! It now sits in the niche formed by the former chapel door.

The church has services twice a month, and an excellent website giving more details of the church, as well as on-line access to its parish registers from 1574 – a much valued resource for family historians.