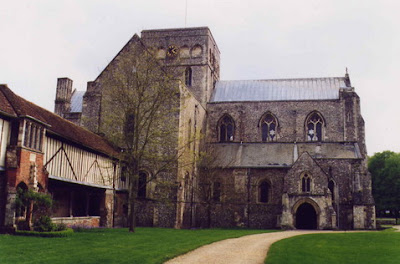 A lovely twenty minute walk along the water meadows by the River Itchen, going south from the centre of Winchester, brings you to the Almshouse and church of Saint Cross.

The Almshouse, founded in 1132, is the oldest and best preserved example of its kind in Britain, and is England's oldest charitable institution. Founded to take care of thirteen frail men and to feed a hundred poor men a day, it was extended in the fifteenth century. To-day it includes twenty five brothers, all pensioners (although they are not actually monks - they're all lay brothers). They wear the mediaeval style of robes of two orders which date to the founding in 1132 or the extension of 1445.

The Almshouse still provides the 'Wayfarer's Dole' to visitors, if you ask for it: a horn of beer and a morsel of bread. The Almshouse also has a lovely garden, open to visitors.

As well as the Almshouse itself, the adjacent church is a magnificent example of late Norman Transitional, on a grand scale, with later Gothic additions. Begun in 1135, it contains both classically Romanesque rounded arches, with all the decorative motifs one might expect of Norman work - lozenges, dog-tooth and zig-zag - with gentler Transitional arches with barely a whisper of a point, to more solidly Gothic work. Building continued until the 15th century. The church has good furnishings, including Tudor screens and an Elizabethan altar rail in the Lady Chapel, fragments of wall paintings and a triptych by Jan de Mabuse dating from around 1500, depicting the Nativity, St Barbara and St Catherine, complete with wheel.