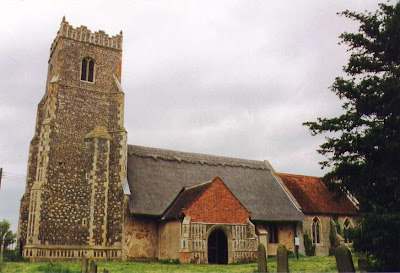 Iken is on the way to nowhere. On the opposite bank of the River Alde from Aldeburgh itself, this small hamlet is set in quiet marshland, and seems almost lost in its solitude.

But it was once a buzzing place: in 654AD the Anglo-Saxon Chronicle tells us that St Botolph founded his Minster here. He came to be one of the most venerated saints in mediaeval England and Denmark, a local patron saint of travellers as well as an important figure in the conversion of eastern England to Christianity. Many churches still bear his dedication.

Unfortunately, nothing remains of St Botolph's foundation, but the church on the site dedicated to him is a delight: unusually, the Norman nave, built in the late 1100's, is still thatched rather than tiled. It has a robust tower dating from the mid 15th century, made of Suffolk flint, and an odd flint and brick porch of uncertain date. The chancel is Victorian, replacing one which became ruinous in the 18th century.

The interior is rather spartan, with scrubbed walls and red floor tiles. But it has an excellent 15th century font, with handsome, robust carvings of angels and the evangelists. More interesting still are the substantial remains of a Saxon cross, dating from the 9th century, with vigorous swirling patterns and zoomorphic elements of dogs or wolves, and what may be a serpent.

After a walk around the church, go back outside to enjoy the tranquil setting. There are some lovely walks in the surrounding area.