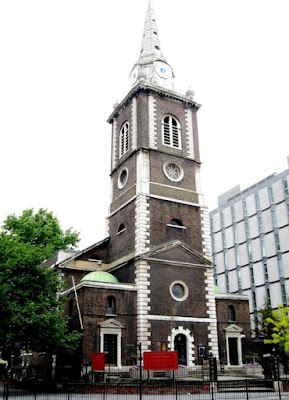 This City church is dedicated to Botolph, an East Anglian Anglo-Saxon saint, regarded during the Middle Ages as a sort of 'English St Christopher'. The church was adjacent to the old (Ald) gate of London, and travellers stopped here to pray for a safe onward journey, or to give thanks for a safe arrival.

First referred to in 1125, although doubtless of older origin, the original church survived the great fire of London in 1666 but became unsafe and was demolished and rebuilt in 1744.

The architect was George Dance the Elder, who designed the Mansion House. He chose a severe classical style, with tall columns supporting a flat roof, and the altar unusally placed at the North End. From the front, the church looks as if it has dropped in from New England, with a central classical tower and spire. The Victorians added a frieze of life-sized angels over the cornice, which rather clashes with the original scheme.

Although the exterior is somewhat spoiled by the traffic, the interior is calm and ordered, helped by the beige and white walls and ceiling, offset with delicate gilding. The stained glass reflects the large number of London's Livery Companies which worship here, and there are some interesting funerary memorials.

But the prize is the organ, dating from 1676 (and thus pre-dating the current church). Recently restored, it is London's oldest working organ and delivers a fine sound. There's a wonderful plaque from the original church, recording that: 'This organ is the gift of Mr Thomas Whiting to the hole parrish 1676'. Spelling was clearly more flexible then!

Regular concerts and art exhibitions are held, and the church has an active bell-ringing group. Services are modern, middle-of-the-road Anglican, with inclusive liturgy. St Botolph's is renowned for its inclusivity, welcoming people from different backgrounds, and especially the gay community.