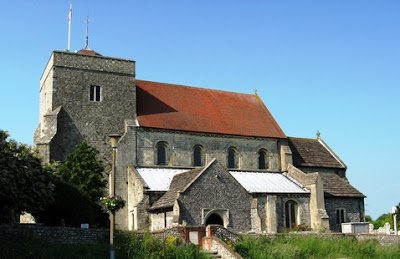 Steyning is a lovely village to visit, if you are in this part of West Sussex, with an interesting historic core of buildings, which also extends to nearby Bramber.

The origins of Steyning's church are somewhat vague: it was founded around the 8th or 9th centuries, supposedly by St Cuthman. But it is clear that during the 9th century there was a flourishing Minster church here, dedicated to its presumed founder. Ethelwulf, King of Wessex and the father of Alfred the Great, was buried here in 858 (though his body was later moved to Winchester Cathedral.) An ancient gravestone in the porch purports to be from his tomb.

Unfortunately, nothing else recognisably survives from the Saxon period: after the Norman conquest, the church came into the care of the monks of Fecamp Abbey in France, who rebuilt the church in Romanesque style between the late 11th and mid 12th centuries. The porch was added in the 15th century and the tower in the 16th, but after the dissolution, the Norman chancel decayed and the present chancel is a Victorian addition.

The nave remains the best reason for a visit: it is a Norman building of very high quality, which makes a strong, even dramatic impression as you enter. The arcades and clerestory are richly carved, with the typical Norman decorations across the arches and columns of ziz-zag and dogtooth carving, with additional human and animal motifs. The whole scheme is a delight, and is preserved in excellent condition. It also has an interesting furnishing, in the form of the reredos behind the altar: this is a handsome piece of Tudor woodwork, brought from a house in the parish.

Also in Steyning are some lovely half-timbered houses and a small museum. After a visit to Steyning, cross the busy A283 to the ruined Bramber Castle. Situated at the entrance to the equally delightful village of Bramber, it makes a perfect spot for a summer picnic.