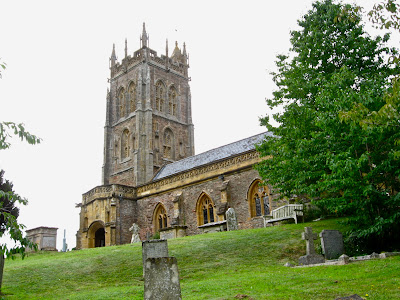 OK, I'll come clean right away. This church is special to me for its family connections - my Great-great-great-great-Grandfather was married here in 1793, and three generations of ancestors lived here until mid-1850's.

So, lucky for me that the church is worth a visit in its own right, for both the setting - Kingston St Mary is a lovely village 3 miles north of Taunton, nestled in the foothills of the Quantocks - and because it possesses one of the best of the Perpendicular 'Somerset Towers' in the County, and the most complete set of 16th-century bench-ends in the UK.

The church itself dates largely from the Early English Gothic period around 1225, but it was extensively remodelled in the late 1400s. This rebuilding provided a new chancel (1490-1520), a new porch (1520) with a splendid fan-vault, and its magnificent tower.

The tower deserves more explanation. A rash of church re-building in Somerset in the 1400s, largely funded by the wealth from wool, resulted in a crop of new, larger towers in the Perpendicular style, with successive towns and villages competing with each other in size and decoration. Kingston belongs to the so-called 'Taunton group', where the emphasis is horizontal rather than the 'Wells Group', which emphasise verticality in their design. Pevsner's Buildings of England: South and West Somerset has a detailed, illustrated description of the different styles.

Dating from 1490, the design places creamy Ham stone dressings on the rich red local sandstone. The tower rises in three stages: at each level, delicate stone tracery fills the windows and bell openings, and eight tall decorated pinnacles thrust up from the tower battlements (decorated with yet more tracery). The corner pinnacles each have four decorated flying buttresses. The tower is also decorated with 'hunky punks', squatting gargoyle-like statues, one of which depicts a woman giving birth to a huge baby. All in all, it is an astonishing architectural legacy for a small rural village.

Back inside, the bench ends, dating from 1522, are carved in oak. Each panel depicts a different motif, including oak leaves, rosaries, potted plants, oxen and yokes. A weaver's shuttle indicated the source of the wealth that allowed all this rebuilding. Also of interest is the tomb of John de la Warre, who fought at Poitiers in 1356, and took the sword from the captured King John of France.

Finish a visit with a stroll around this delightful village - and, of course, a pint of ale or two in the Swan pub.