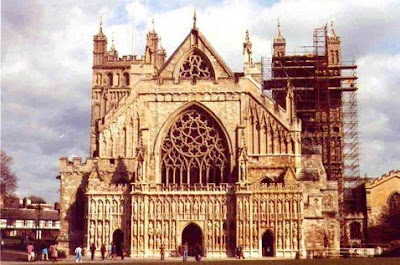 Although not as well known as Salisbury or Canterbury, Exeter has one of the loveliest cathedrals in England.

Dedicated to St Peter, the cathedral is built on an ancient Christian site: St Boniface, the Patron Saint of Germany, was educated at a monastery close to the present location in 690. The history of the Cathedral itself dates from 1050, when the bishopric was moved here from nearby Crediton.

The Normans rebuilt the church in 1114, although only the towers and some foundations remain from this period. Most of the present building dates from the rebuilding in the decorated gothic style, begun by Bishop Bronescombe in 1270, and completed over a century later. The result is a glorious harmony of late mediaeval gothic architecture, set in a tranquil green oasis just minutes from the bustle of Exeter city centre.

Notable features of the interior include the minstrels' gallery (1350), with statues of musicans playing different mediaeval instruments, and the ceiling bosses, one of which depicts the murder of Thomas à Becket.

Because there is no central tower, Exeter Cathedral has the longest uninterrupted gothic vault in the world. Another feature is its astronomical clock (1480). There are also tombs of bishops and knights, and a startling Bishop's Throne dating from 1312, the canopy of which soars almost 18 metres high.

Guided tours are available (daily - times vary). The Cathedral also has a shop and a cosy refectory, which serves light meals and snacks.

Also well worth a visit is the adjacent Cathedral Library, which houses a number of manuscripts dating back to Saxon times. Its treasure is the 'Codex Exoniensis': written between 950 and 1000, this priceless work contains the most extensive single source of Old English poetry from the Anglo-Saxon period in existence.