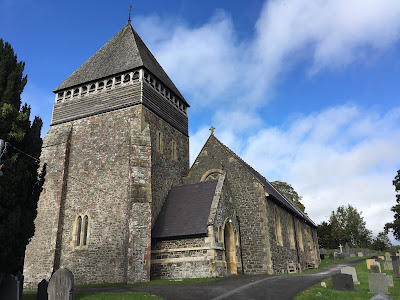 Llandinam is mainly known as the birthplace of David Davies, the industrialist responsible for many of the collieries in the Rhondda Valley and the subsequent development of Barry as a seaport.
But it is also home to a church with an interesting past and dedication, though it is easy to miss, built high on a promontory overlooking the village and the busy A470 road below.

Claimed to have been founded in 520AD, the church served a monastery until the 13th century and was the mother church of Llanidloes and Llanwnnog. However, only the robust 13th century tower, its stair turret and a portion of the north wall survive from the mediaeval period, the rest being a thorough 19th century rebuild in 1864-5 by G.E Street.

The tower itself has a quaint, small window on the stair turret (which effectively forms a buttress on the north-west corner). Other mediaeval fragments include tomb recesses and a piscina in the chancel, and the inner arch from the porch into the tower, and the 14th century tower arch itself. The main body of the church has a large south aisle and a darkly atmospheric chancel (thanks to some heavy Victorian stained glass).