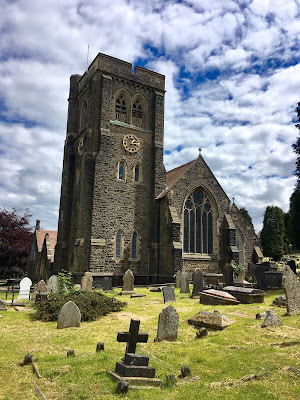 St Martin's is the parish church of Caerphilly and part of the Church in Wales. It forms part of a joint benefice for the town which also includes St Catherine's and St Andrew's.
The present church replaced an earlier, probably 13th Century chapel, which lay to the west of today's site. St Martin's Chapel was part of Eglwysilian parish until 1850 when the parish of Caerphilly was created.
The present neo-gothic church was designed by a former pupil of Sir George Gilbert Scott, Charles Buckeridge in 1873 and built in 1877-9: the nave was lengthened by 2 bays in 1904-5, and the prominent and rather handsome tower was constructed in 1907-10, both by local Cardiff architect George Eley Halliday. The south aisle was widened in 1938.
The church is in an Early English style, with the larger windows filled with geometrical tracery. It has a spacious nave and aisles with a handsome arcade of 5 bays, leading to the chancel flanked by side chapels. The only ancient feature is the 15th Century font. The east window has fine glass.
The church is open during weekday mornings for visits and private prayer as well as services on Sundays. We received a very warm welcome on our visit.
St Martin's Church, St Martin's Road, Caerphilly CF83 1EJ
Posted by David J at 21:38