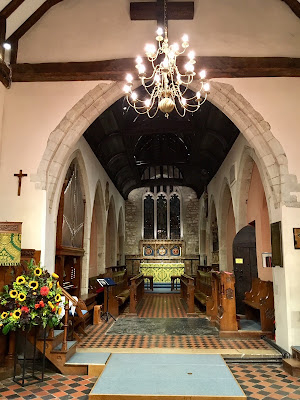 Who would have thought that, tucked away in a quiet corner of suburban south west London, was a picturesque mediaeval church, with connections to Nelson and Captain Cook?

But St Mary's is that church: recorded in the Domesday Book, the original Saxon church was replaced by a Norman church, built in stone, around 1115 by Gilbert, Sheriff of Surrey and the founder of nearby Merton Priory. The chancel was rebuilt in the early 13th century, and a fine timber porch added in the 15th century. The Victorians added the south aisle in 1856, and the north aisle in 1866. Nelson (who lived at nearby Merton Place) worshipped here from 1801 to 1805, and his pew (at the front) still survives.

The Norman nave arcade has alternating octagonal and round piers, supporting a roof which dates from the 13th century - the tie beams were a gift from Henry III. They lead to the chancel, with its four bays of blank arcades, supporting a no-less impressive hammer-beam roof from c. 1400. The north door also dates from the 12th century, and is decorated with zig-zag to the arch; the door beneath has mediaeval iron-work.

The chancel contains a handsome Renaissance wall monument to Gregory Lovell (d. 1597), Elizabeth I's Treasurer, who purchased Merton Priory after the dissolution. He is shown with his two wives and children. The fine memorial to Rear Admiral Isaac Smith (d. 1831), the first European to step onto Australian soil, was paid for by Elizabeth, Captain Cook's widow. Nearby are memorial hatchments to both Nelson (including a jolly sailor) and that of Sir William Hamilton, husband of Emma, Nelson's lover. Less profane is a fragment of 14th century stained glass in the south-east window of the chancel, depicting Christ's head.

Outside the church to the west is an elaborate doorway from 1175, presumably rescued from Merton Priory.

The church is the centre of a busy parish life, which include a regular sung Evensong.