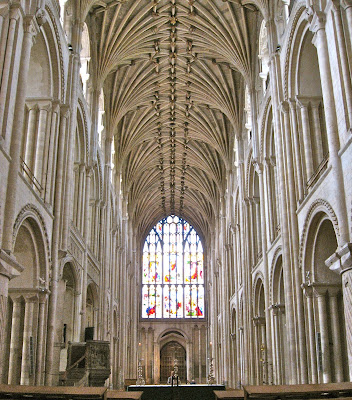 Norwich Cathedral is a gem of English mediaeval architecture, and one of the best preserved from the Norman period.

The Normans moved the Saxon see of Elmham to Thetford in 1072 and again to Norwich in 1094. Building started in 1096 and was completed in 1145. Much of this fabric survives, particularly the main tower and the arcading of the nave and choir. The exceptions include the clerestory of the choir, rebuilt in the Perpendicular style after the spire collapsed in 1362; the spire itself (1480), replaced after being struck by lightning in 1463; the vaults, built successively in the 15th and 16th centuries; and the cloister (1297-1430).

The cathedral suffered badly in the Commonwealth period, when mobs stripped what they regarded as idolatrous furnishings. Repairs were carried out after the Restoration of Charles II in 1660, and again in the 19th century in 1950s. A new, award-winning refectory was built in 2004 on the site of the mediaeval original.

The Cathedral retains its original proportions and ground plan, unusually in England in having an apsidal East End behind the high altar, with a processional ambulatory. The spire is, at 315ft, the second highest in England after Salisbury; the cloisters are the also the second most extensive (again after Salisbury).

The arcades are wonderful examples of Norman Romanesque, but the vaulting is equally spectacular - the collection of bosses (over 1,000 in total) is unique. Those in the Nave tell the story from the Creation to the Day of Judgement, whereas those in the Cloister (which are more easily accessible) depict the life of Christ and scenes from the Apocalypse.

Other furnishings of interest include a superb set of over 60 misericords, the 11th century statue of St Felix, and the outstanding Despenser Reredos. Rediscovered in 1847, this dates from the time of the Peasants' Revolt in 1381, and may have been commissioned as a thanksgiving. The Erpingham Window contains most of the Cathedral's surviving mediaeval glass.

Outside the Cathedral, the Cathedral Close has well preserved 14th and 15th century gatehouses, and a variety of buildings, ruins, monuments and gardens within its 85 acres. Buried here are the remains of Edith Cavell (1865-1915), the nurse infamously executed in Brussels by the German Empire in the First World War. Her remains were brought back to Britain and interred in 1919.