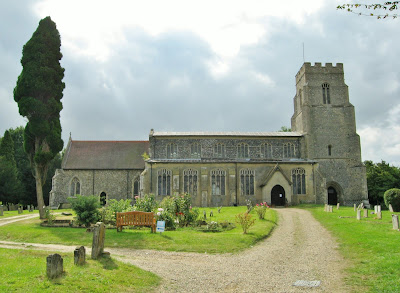 St Mary, Combs sits on a ridge overlooking the settlement of Combs, now effectively an extension of Stowmarket. It is grand and oddly isolated for an urban church - access is by a very narrow, mile-long lane from the edge of a housing estate.

A church is mentioned on the site in the Domesday Book, but most of the present building is typical Suffolk. it has a bold, Perpendicular Gothic tower, nave and clerestory; with a smaller, older Decorated chancel, although the west window in the south aisle dates from around 1300, suggesting that the nave and aisles were enlarged on the same plan in the 1400s. The interior is wide and spacious, but the interest is in the fine details: the striking piscina and three-seat sedilia in the chancel was composed as a unity, under four matching crocketed ogee arches. The effect is strangely modern.

Much of the mediaeval glass had survived until 1871, when an explosion at a gun works in Stowmarket blew out the windows. Nevertheless, enough remains to make for an interesting visit: subjects include the life of St Margaret, the Seven Works of Mercy (the counterpart to the better known Seven Deadly Sins), and part of a Tree of Jesse. Other items of interest are the 15th century Parclose screens in the north and south chapels, benches with poppyheads and beasts, a fine Jacobean pulpit, and a 14th century font with foliage and blind tracery on the stem.