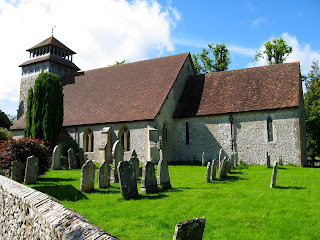 Situated close to the lovely River Meon, St Andrew is a well preserved 13th century church with a long and interesting history.

There has probably been a church on the site since St Wilfrid brought Christianity to the Meon Valley, in the late 7th century. The east bank was originally part of a Jutish kingdom, separated from the Saxons by the River Meon, which was then both wider and navigable at this point. This explains the presence of separate villages and separate churches on either side of the river: Corhampton church is just 100 yards away.

A church was mentioned in the Domesday Book, but the present structure was built around 1230, probably by masons working on Winchester Castle (1222-1235), which shares the same style of windows as those in the clerestory. The interior is Early English in style, with lancets in the chancel and tower, and an elegant arcade of pointed arches on alternating round and octagonal piers. The only oddity is the rounded 19th century chancel arch (at least according to Pevsner and the Listing details - the church guide claims it as original).

The nave roof was raised in the 18th century, as is clearly evident from the corbels in the aisles and the position of the clerestory windows under the aisle roofs. As a consequence, the 15th century tower was somewhat squat in comparison, a problem solved neatly in 1900 by the erection of the distinctive two-stage tower.

The fittings include a 14th century Easter sepulchre in the chancel, the very fine original font of Purbeck marble and a 13th century painted consecration cross.
St Andrew: Church Lane, Meonstoke, Hampshire, SO32 3NA
Posted by David J at 23:11