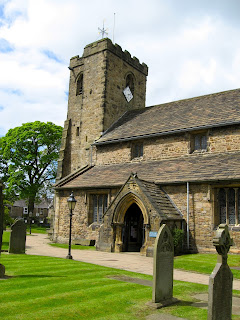 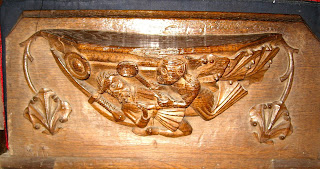 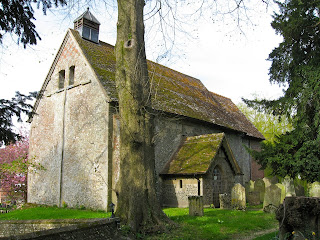 Corhampton is a well preserved Saxon church with rare wall paintings of St Swithun, and still used for regular services.
History
Corhampton village is situated in the lovely Meon Valley, and was one of the last places in England to be converted to Christianity, thanks to the efforts of St Wilfrid in the late 7th Century. The foundation probably dates from that time, the first church being almost certainly of timber, wattle and daub. Why this outpost should have been graced by a stone-built church is something of a mystery, but graced it was, early in the 11th century. Aside from a porch and vestry, added in the 1600s, and a renewed east wall, it stands much as it did when it was built. It has no dedication.
The church
The building has been dated to around 1020, and is constructed as a simple two-cell church of nave and chancel. On the outside, the chief features that betray its Saxon heritage are the ‘long and short work’ quoins on the corners, and a series of thin pilasters, known as lesenes. These are purely decorative and do not attempt to mimic a structural function. This eccentricity is best demonstrated on the north wall, where one runs vertically - and rather awkwardly - from the apex of an arch.
Inside, the original simple chancel arch remains, with lancet windows to north and south. Among the fittings of interest, pride of place goes to the wall paintings showing the miracles of St Swithun; in one, he restores the broken eggs knocked accidentally from the basket of an old woman; in another, a drowned man is taken on a stretcher, subsequently restored to life having been placed next to the tomb of the saint.
Other features include a Norman font with rope decoration; pretty 18th altar rails, rather resembling Welsh love spoons; a Jacobean pulpit;  and a Victorian west gallery. In the graveyard is a Roman sarcophagus, of unknown origin, as well as a yew of great age and girth.
Corhampton, Hampshire, SO32 3ND
Posted by David J at 22:52 No comments: 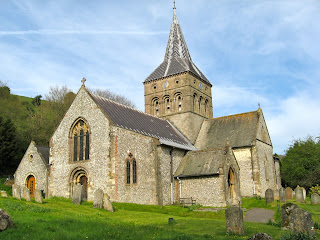 All Saints is an impressive example of a Norman parish church in a wonderful setting, particularly noted for its carved 12th century font of black Tournai marble.

The Normans probably replaced an earlier wooden church of Anglo-Saxon foundation. The parish records suggest the rebuilding began in 1080, though a date of around 1130-50 seems likely. This resulted in today's cruciform church with its impressive tower. The 13th century added a south aisle and lady Chapel, as well as the attractive broach spire, and in the 14th the windows of the transepts were replaced in the Decorated style. The north and east walls of the chancel were rebuilt around 1500.

The setting is impressive in itself: the church sits in a commanding position on a hillside overlooking the village below. It is a lovely example of the Norman style, with zig-zag abounding on the tower's bell-openings, and the west and south doors. There are a few original round-headed windows but the remainder are an interesting mix of 13th windows with plate tracery and some peculiar 14th century decorated windows with straight-pointed heads rather than the normal curved arches. The east window in the chancel is a 19th copy by Ninian Comper of the original Perpendicular design.

Other features of interest include the pulpit dated to 1706, brought from the now-demolished church of Holy Trinity, Minories in London; and the reredos and screen between the chancel and Lady Chapel, both by Comper.

But the real treasure is the font. This dates to around 1130-40, and was probably a gift from the Bishop of Winchester, since it resembles a similar font in Winchester Cathedral. The sides and upper surface are decorated with vigorous carvings: two of the sides have blind arcading with birds and animals, but the other two show first the creation and temptation of Adam and Eve, and then their expulsion. Unusually, they are shown leaving a church rather than the garden of Eden. A lovely touch is the angel showing Adam how to dig and Eve how to spin after the event. 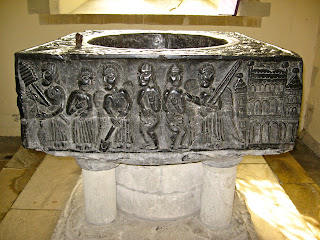 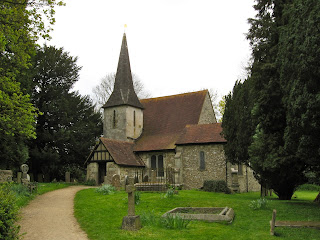 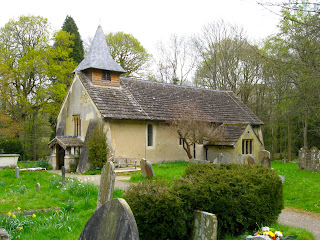 Who would have thought so remote a church could exist less than hour from London? Tucked away at the end of a lane in a small valley, Okewood feels truly hidden.

Once it was not so remote, but at the confluence of local footpaths from a series of small, scattered settlements. Around 1220, a small chapel of ease was built to serve this community. It was further endowed by one Edward de la Hale (d. 1431) in thanksgiving for the life of his son, who survived a freak hunting accident. A fine, small brass of de la Hale is situated beneath the chancel floor.

The chapel was suppressed in 1547 (being mistaken for a chantry), and only the petition of local yeoman succeeded in reversing this in 1553, although it was not given effect until 1560. The church was often in a parlous state in later years, subsidence of the north wall presenting a particular problem. In 1879 this was rectified by moving the north wall, and inserting the present north aisle, effectively doubling the church in size. The church was substantially restored again in 1997, turning the north aisle into a multi-purpose space..

The church retains its original lancet windows to the south wall. Those on the north wall are also original, having been reinserted after the works in 1879. The east and west windows are Perpendicular. There are faint remnants of wall paintings on the south chancel wall, and fragments of mediaeval glass, depicting flowers and leaves, in the adjacent lancets.

Remote it may feel, but the church has a busy parish life and hosts regular Sunday services in contemporary style, with specific provision for children. 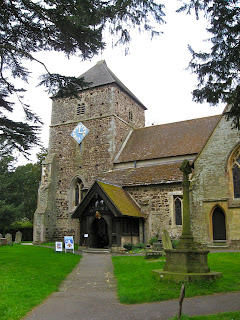 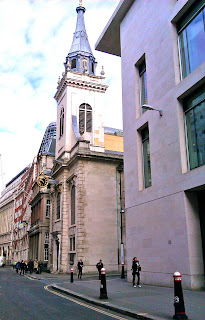