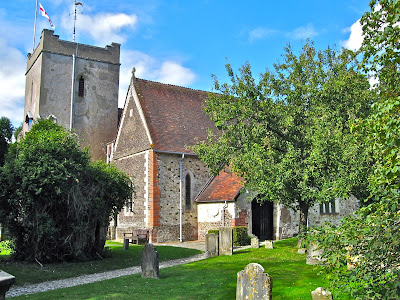 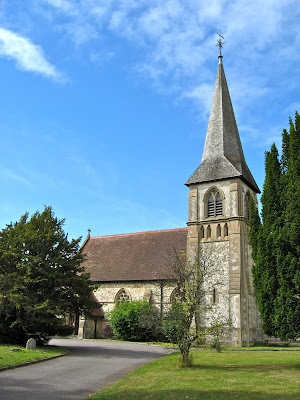 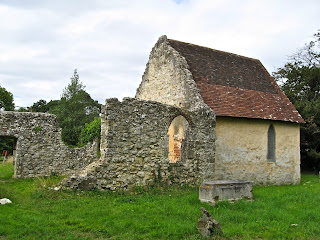 Greatham is a comfortable little village with two churches: one mediaeval one, part ruin, which is no longer in use as a church and now maintained by the village; and a short distance away, an imposing Victorian replacement.

The old church had an aiseless nave and chancel. The nave is now ruinous and roofless, though the walls survive to sufficient height to get an idea of the arrangement. The west window as attractive Y-tracery.

The chancel has a tiled roof and cement-rendered walls (on malmstone and ironstone),
and an 18th century chancel arch. Items of interest include a  Jacobean communion rail, an old font bowl, and 18th and 19th century wall monuments. But the prize is a lovely classical table tomb, dedicated to Dame Marjory Caryll (d. 1632), surmounted by a delightful recumbent effigy.

A key to the chancel may be obtained from local villagers - details on the noticeboard.
Posted by David J at 23:29 No comments: 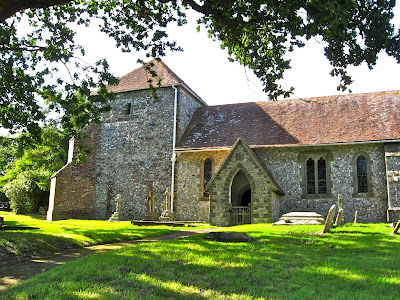 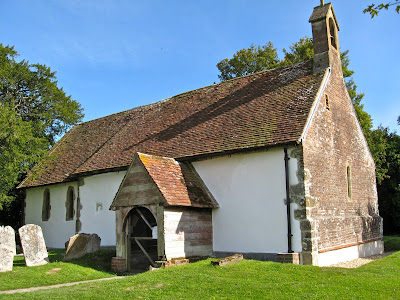 Situated high up on the northern slopes of the South Downs, Didling is well-known as the "Shepherd's Church". It lies at the end of a lane, quite isolated, surrounded by fields and trees.

The building is a simple 13th cell, with the nave and chancel without aisles or a chancel arch. The joy lies not just in its location, but in its unrestored feel, with rustic mediaeval pews and Jacobean altar rail, and a simple 12th century tub font. The church has no electricity and is candle-lit in winter, with candle-holders on the pew ends and simple candle holders hanging from the ceiling - chandelier isn't really the right word here.

The churchyard has a great yew, axe recalling an attempt to fell it in the 19th century. It was saved by the intervention of a passing parishioner. 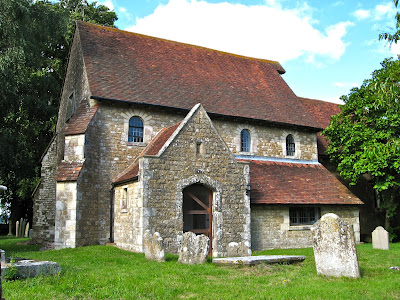