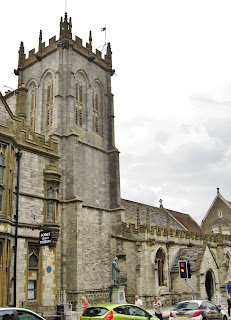 St Peter's is a classic mediaeval town church, containing some interesting memorials, although today is rather hemmed in by traffic.

Although there has been a church on the site since Norman times, the present building dates from 1454, after a bequest for a new church was left in 1420. It was restored in 1856, the architect's assistant being one Thomas Hardy, the novelist. One of its rectors, John White (1606-1648) was instrumental in the establishment of the Massachusetts Bay Colony, forerunner of the American State.

The church is essentially Perpendicular Gothic throughout, and has a fine west tower, porch, and an aisled nave and a chancel flanked by chapels. The main doorway in the porch has zig-zag decoration and was probably re-used from the earlier church. The pulpit is an attractive 17th century example, but the main interest lies in the memorials.

In the south chapel are the effigies of two knights, probably dating from the 14th century. The guide-book suggests they have come from a former monastery. Rather hidden behind the organ is the very fine memorial to Sir John Williams (d. 1617) and his wife, erected in 1628, and a good example of its type. Sir John and his wife face each other kneeling, under a large arched canopy, decorated with strapwork. It deserves to be better placed.

In the north aisle is a splendid classical monument to Denzil, Lord Holles (d. 1680), who played a major role in trying to reconcile the parliamentary and royalist factions after the English Civil War. Finally, the reredos depicts the Last Supper, and commemorates the 7th Earl of Shaftesbury, known for his campaigning for the abolition of child labour.

The church is part of the united benefice of Dorchester.