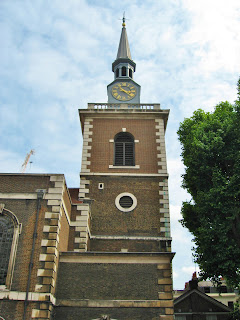 St James’s is a famous landmark on Piccadilly, and an excellent of the work of Sir Christopher Wren.

The church was built in 1872-84 on land set aside by the Earl of St Albans, to serve the growing population of the area after the laying out of St James’s Square. Wren’s designs had made provision for a steeple (tower and spire) at the west end, which turned into something of a saga, as the foundations were inadequate and cracks appeared as the original spire were being added. After remedial work, settlement stopped, but not until the original spire had been taken down and replaced.

The church had only relatively minor alterations and restorations in the succeeding years, but was badly damaged by bombing in May 1940, when incendiaries burned the roof. Fortunately, some of the best fittings (including carvings by Grinling Gibbons, and the organ) had been specially protected. It was restored in 1947-54, although the tower was reduced in height.

The church is of brick with Portland stone dressings, with large round-headed windows. The interior is whitewashed with the decorative plasterwork picked out in gold. The nave has galleries on three sides, with a barrel-vaulted roof supported on Corinthian columns, with side vaults for the windows.

The celebrated reredos has carvings by Grinling Gibbons. The font – installed in 1686 – is also attributed to Grinling Gibbons, and has a stem representing the Tree of Knowledge (complete with snake) and the figures of Adam and Eve either side. William Blake as baptised in the font in 1757.

The church has a wide reputation for social justice and inclusion with daily services. It is also a popular concert venue. There is a small but tranquil church garden to the west of the tower, and the forecourt has been home to a market since 1981, with food, antiques and crafts sold on different days.