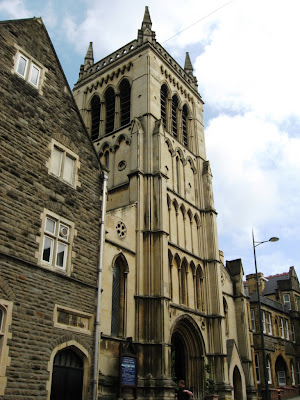 A small chapel was built on the site of the then-expanding seaport and industrial centre in 1812, but the town's continued growth meant that a larger church was soon needed, and the original chapel was demolished in 1839. The new church was built in the neo-Gothic style, with a prominent tower at the west end, which also formed the main entrance. Inside, the nave arcade was built with slender columns made of cast iron - the first such use of metal pillars in Wales.

The construction of St Mary’s took place around the same time as the Chartist uprising; the Chartist rioters passed the church and ordered workmen to join them, although they declined. In 1901 the original east window was replaced by one of the Assumption of the Virgin by John Hardman, who worked with the Pugins.

The church is essentially in the Early English Gothic style, with tall lancets with shafts and hoods, and the slender piers have frilly stiff-leaf capitals. The most notable feature of the church from the outside is its tower, the muscular design of which, decorated with abundant blind arcading, provides a distinct contrast with the light and airy interior. Indeed, the pale pink walls with white arcades and detailing gives almost a wedding-cake like appearance.

Today, the church is part of the united parish of 'All Saints' in Newport, formed in 2007 and incorporating six former parishes. Although the interior is not open outside service times, the outer doors are kept open, allowing one a good view into the nave.