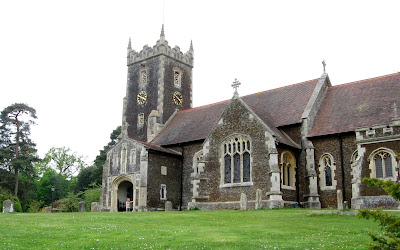 St Mary Magdalene is well known as the church that the Queen attends at Christmas at Sandringham. Although a parish church, the extensive interior decoration and royal memorials are evidence of its close royal links since the late 19th century.

The building itself is made of the distinctive dark brown carstone, set off by white stone dressings. Although mediaeval in origin, the largely 15th century church was heavily rebuilt in the 19th century, first by the architect Samuel Sanders Teulon in 1855 and then by Arthur Blomfield in 1890.

From the outside, it looks like an ordinary parish church, with a west tower, porch, nave and a small chancel, a small north aisle and south transept. Inside, the church has an intimate atmosphere, but the elaborate decoration is clear evidence that it is not your average parish: the chancel in particular has a complex decorative scheme of painted panels and roof in the 15th century style.

There are fragments of 15th and 17th century glass, but the eye is inevitably drawn to the furnishings: the striking altar frontal is of beaten silver and was a gift in memory of Edward VII. The pulpit similarly has decorative beaten silver panels. The walls are covered in memorials of royals, from Princess Alice in 1879 to the late Queen Elizabeth, the Queen Mother, along with some of Sandringham Estate workers who died in the Great War.

Outside, are the graves of Prince John (1905-19), son of George V, and of Prince Alexander John (d. 1871), youngest son of Edward VII, who died after one day, having been born prematurely.

The church is open for visitors in the summer months and only for services in the winter. Photographs are not permitted of the interior. There is a small shop selling guides, cards, and gifts at the rear.