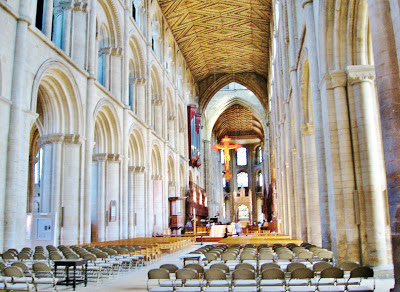 Peterborough has one of England’s best preserved large Norman churches. The former abbey has had a colourful past – raided by Vikings, attacked by both rebel Saxons and Cromwellian troops, and burned down twice. It is also the burial place of Katherine of Aragon and the temporary burial place of Mary, Queen of Scots. It is now known formally as the Cathedral Church of St Peter, St Paul and St Andrew.

The Anglo-Saxon King Peada founded a monastery on the site in 655 although, like many, it was destroyed in a Viking raid in 870. Rebuilt as a Benedictine Abbey in 970, it survived a further attack around 1069, this time from Hereward the Wake, only to be destroyed by an accidental fire in 1116.

The present building was built largely between 1118 and 1238, although the central tower was rebuilt in the Decorated Gothic style 1350-80. The East End was extended behind the apse to form a retrochoir in the Perpendicular Gothic style, between 1496 and 1508. Much of the cost of building the cathedral was funded by Pilgrims visiting some of the relics of St Thomas a Beckett, brought to Peterborough by Abbott Benedict – a former Prior of Canterbury - in 1177.

Katherine of Aragon (Henry VIII's first wife) was buried here in 1536. After the dissolution of the monasteries, it became the Cathedral of the new Diocese of Peterborough in 1541. It was the also burial place of Mary, Queen of Scots, from her execution in 1587 until her reburial in Westminster Abbey in 1612. The cathedral was severely damaged during the Civil War by Cromwell’s troops in 1643, but restored by J L Pearson in 1882-6.

The most notable external feature is the unique great west portico, consisting of three huge arches in the Early English Gothic style, flanked by square buttresses decorated with Gothic blind arcading and topped with tall pinnacles. The narrower centre arch had a smaller porch inserted into it in the late 14th century.

Inside, the long nave of 10 bays is one of the best preserved examples of Norman (Romanesque) architecture in the country. Of particular interest is the wooden ceiling, a very rare survival, built in 1230-50 and consisting of lozenge-shaped panels decorated with figures of kings, queens, saints and monsters.

The crossing, transepts and choir are also Norman work, and contrast sharply with the Perpendicular retrochoir, which is notable for its profusion of fan vaulting. Most of the nave and choir windows were renewed in the 14th and 15th centuries, but only two windows above the High Altar retain fragments of mediaeval glass.

Cromwell’s troops destroyed many of the original fittings and furnishings, although the monument to Abbot Hedda (c. 800), caved with images of Jesus and Mary and ten disciples, survives in the East End. Also extant are a number of marble effigies of Abbots dating between 1195 and 1225, and a fine carved 13th century font in the nave. A marble slab on the north choir aisle denotes the resting place of Katherine of Aragon (1485-1536) and in the opposite aisle the location of the former tomb of Mary, Queen of Scots is marked. An interesting picture hanging at the west end of the nave depicts Robert Scarlett (1496-1594), a gravedigger who buried both Katherine and Mary, and who lived to the age of 98.

Today, the cathedral provides regular daily services and has a renowned choir, which sings a daily Evensong as well as during the Sunday services. It is open every day for visitors, except Boxing Day.