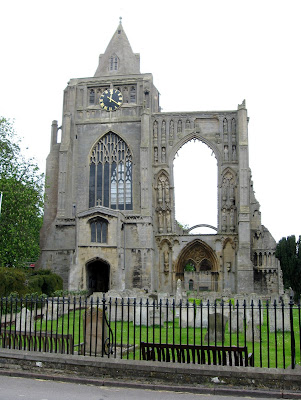 Crowland Abbey is a magnificent building - now part church, part ruin, near Spalding in Lincolnshire, with an interesting but turbulent history.

The abbey was founded in memory of St Guthlac (673-714), a monk who founded a hermitage on the island of Crowland in the 8th century. King Aethelbald of Mercia founded a monastery on the island in 716 in his honour, but it was destroyed in a Danish raid in 866. Refounded as a Benedictine house in the reign of King Edred (reigned 946-955), it was destroyed by fire in 1091, but rebuilt about twenty years later. Another fire burned the abbey again in 1170, after which it was rebuilt once more.

Thereafter, it thrived until the dissolution in 1539, by which time it had become one of the wealthiest abbeys in the country. The remains were fortified by the Royalists during the Civil War and damaged further by the Roundhead forces. The nave roof fell in 1720, the main south wall was taken down in 1744. The north aisle survived the troubles, however, as it had long functioned as the parish church, and still does today.

The west front of the abbey is startling: the north aisle has a robust tower, built in the 12th-15th centuries, next to the remains of the great west front of the nave, all niches and statues. Above the former west door is a superb 14th century quatrefoil carving with images of the life of St Guthlac. Looking along the length of the former nave, the view is framed by the delicate remains of the Romanesque Crossing arch. To the south of the west front, fragmentary remains of the original west end of c. 1165, include some fine blind arcading.

Inside, the former aisle is impressive. It was remodelled in the 15th century and has superb vaulting, as well as a magnificent panelled tower arch. Fittings and furnishings are of great interest. The early 15th century chancel screen has panels decorated with images of angels, dragons, flowers, fish and one with Guthlac in his boat. Above is a lovely ceiling boss of a Green Man.

There is an octagonal 15th century font, and the tower arch has a large stoup incorporating a 12th century drum font under a cusped arch. Close by are two interesting tomb stones: one, very small, is ascribed to enclosing a crusader's heart, but is more likely to be Saxon; the other is to the mason William de Wermington, (d. 1427) depicting him holding his compasses and set square.

Today, the church hosts regular services in the Anglo-Catholic tradition.
Posted by David J at 22:40