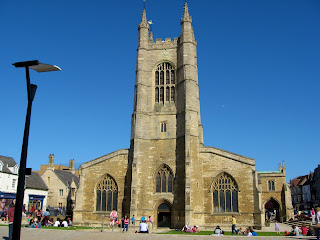 St John's is Peterborough's parish church, and sits in the centre of Cathedral Square, a few minutes' walk from the Cathedral.

Although Peterborough has had a parish church since the 11th century, flooding of the original site to the east of the abbey led to it being rebuilt in 1402 on the present site, and it was dedicated in 1407. It was much restored in the Victorian period, by the architect J L Pearson, architect of Truro Cathedral. The north porch dates from 1473.

Its bells sounded for the funerals of both Katharine of Aragon (1536) and Mary, Queen of Scots (1587) in the cathedral. The church sexton, Robert Scarlett, buried both Queens, and is himself buried in the cathedral, having died in 1594 at the age of 98. A portrait of him hangs at the west end of the cathedral.

The exterior is largely in the Perpendicular Gothic style, church itself has a long nave arcade and aisles, with a chancel and Lady Chapel, but no crossing. The most prominent external feature is the tower. The 15th century south porch is the best preserved part of the building, and its vault has attractive bosses depicting the Trinity, Annunciation and Crucifixion.

Furnishings of interest (most are Victorian or 20th century) include a 15th century font, and two rare framed examples of 15th century embroidery, probably from church vestments. The monument to the local MP, Matthew Wyldbore, d. 1781, is the most impressive of several in the church.

The church is open twice a week with a cafe at the west end, as well for services, which are traditional in style.