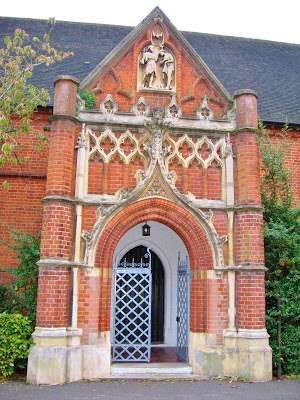 St John's lies between Wimbledon and Raynes Park, just below the Ridgeway, and is a good example of a late Victorian neo-Gothic church.

The church was built to service the growing commuter population brought to Wimbledon by the London and South-Western Railway. A plot of land was bought in 1867, but a lack of funds meant that the first building was a temporary prefabricated ‘iron church’. Made of corrugated iron, it came, according to the church’s website, “complete with altar and font, illuminated texts all over the windows and two seraphs to each entrance”.

The present church was begun in 1873 to designs by Thomas Jackson (1835-1924) and consecrated in 1875. Jackson delivered a classic red-brick neo-Gothic church, with a nave, chancel and a large north aisle. From the outside, it is not particularly distinguished, save for the large east window and an impressive north porch, which has Decorated Gothic detailing.

The interior space is dominated by the tall single arcade between the nave and north aisle, but the main  interest is provided by the fittings and furnishings: there is some lovely stained glass, including a window from the William Morris factory (the figure of Martha is by Edward Burne-Jones, that of Christ by Henry Dearle); a delicate chancel screen; and a reredos in the Lady Chapel (north aisle) by Martin Travers. The organ, installed in 1904 by Hill, Morgan and Beard, is a particularly fine example.

The church has an vibrant worship life and is a very popular venue for music, thanks to an excellent acoustic. 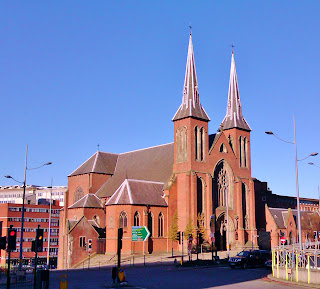 St Chad’s is the Roman Catholic Cathedral of Birmingham. Located prominently (and slightly unfortunately) on the city’s inner ring road, the striking Germanic twin towers of its façade are matched by an impressive interior.

The building was designed by Augustus Pugin (1812-1852), most famous for his decorative work on the Houses of Parliament. The church was built to replace a chapel erected in 1808, and provide more accommodation to service Birmingham’s burgeoning Roman Catholic population. Construction began in 1839 and it was substantially complete by 1841. It became a Cathedral in 1850, making it the first Catholic Cathedral erected since the Reformation in England.

The church is designed in a north German 13th century style, executed in red brick with Bath stone dressings. The most prominent features are the two slender towers which frame the main façade, topped with tall broach spires. The interior is a revelation: although the plan is conventional, with transepts and an apsed sanctuary, Pugin created a ‘Hall church’, with very tall arcades and aisles of similar height to the nave. This delivers scale and spaciousness on an otherwise restricted site. The ceilings are beautifully decorated throughout, illuminated by wide expanses of plain glass.

The principal interest of its furnishings is the reliquary behind the High Altar, which houses some of the bones of St Chad, rescued from the cathedral in Lichfield after the Reformation. Recent archaeological investigation has confirmed their likely authenticity (several date from the 7th century). In the ‘north’ aisle is the impressive tomb chest to the first Bishop and instigator of the Cathedral, Bishop Thomas Walsh, executed in the Decorated Gothic style.

The Cathedral has a reputation for excellent music in its worship. It is open every day for services, visitors, and private prayer.