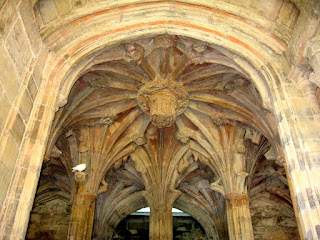 St Winefride’s Well – often referred to as the ‘Welsh Lourdes’ - is reputed to be Britain’s oldest continuously visited pilgrimage site. The unique well-head and St Winefride’s Chapel above constitute some of Wales’s best 15th century architecture.

Shrouded in legend, the site is said to date from the 7thcentury, when Winefride, daughter of a local nobleman and a devout Christian, was decapitated by the local Chieftain Caradog for resisting his advances. Through the prayers of her Uncle, Saint Beuno, her head was restored with only a faint scar, and a spring flowed from the spot where her head had fallen. Whatever the legend, the historic Winefride became a nun and ultimately abbess of the foundation at Gwytherin, and died there in 660AD.

The well has since been a popular pilgrimage site, especially through the middle ages. Royal visitors have included Richard I, Henry V, Edward IV, and Richard III. James II and his second wife, Mary of Modena, visited in 1686 and it is said their prayers for a child were answered by the birth of their son, James Stuart.

The present well-head and chapel were built in the early 1500s, although the shrine of St Winefride was destroyed in the reformation. Despite the best efforts of the authorities, the well continued to be a popular place of pilgrimage and was associated with the Catholic recusancy. The well was rented by the Jesuits in 1873 and is now in the care of the Catholic Diocese of Wrexham. St Winefride’s Chapel is in the care of Cadw.

The well and chapel

The well complex includes a modern entrance building, museum and shop, with attractive lawns fronting the well-head. There is a large modern pool beside the well, where bathing is still permittedat certain times.


The well-head itself (effectively forming the crypt of the chapel above) is an intricate structure, the stone-lined pool covered with an elaborate octagonal late Perpendicular vault. A profusion of elaborately carved bosses include depictions of St Winefride’s legend, the likely patron of the building, Lady Margaret Beaufort, and scenes of healing. Nearby is a modern statue of St Winefride, complete with neck scar.
The Chapel above is a delightful example of Perpendicular architecture, with a fine wooden roof and wide windows filled with clear glass. Corbels and bosses abound with yet more carving, depicting saints and angels, heraldic devices, beasts, dragons, hunting scenes and grotesque faces. The Chapel hosts occasional festival services.