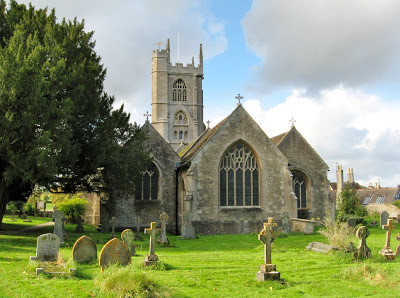 The village of Norton St Philip, just south of Bath, is probably best known for its mediaeval George Inn, and its associations with the Monmouth Rebellion in 1685. But it has a charming mediaeval church with much to interest the visitor.

Although the village is mentioned in Domesday, the first reference to the church is in 1292, and the list if priests begins (unbroken to the present day) in 1331. Most of the existing church belongs to the 14th and 15th centuries. It was, however, much altered in the 17th century by a local man, Jeffrey Flower (d. 1644), and heavily restored by Sir George Gilbert Scott in 1847, so dating much of it is difficult – not helped by the fact that Flower is said to have brought ‘odds and ends’ from Hinton Priory.

The oldest parts are the south porch and south aisle which, with the south nave arcade, date from the late 13th or early 14th century. Most of the rest of the church is 15th or 16th Century Perpendicular, although the tower is said to have been altered to the designs of Jeffrey Flower and the north aisle probably dates from the 17th century.

The most striking external feature is the tower, which is broadly of the local Somerset design, but with an unorthodox arrangement of niches, windows and bell openings. It has a west doorway with a shallow porch (said to be one of Flower’s additions) with niches inside and out, and a ribbed roof supported on two large beasts. The south porch has 13th century features and a nice later wagon roof with carvings, and two doors with a staircase on the east wall, indicating that at one time it had an upper room.

Inside, the south arcade has square piers and is of early 14th century style: the north arcade has two panelled arches flanking a central arch with odd responds – possibly part of the 17th Century work. There is a tall and imposing Perpendicular west tower arch, but the tower vault is ascribed to the 17th Century. The nave’s magnificent (but Victorian) hammer-beam roof has large carved angels on the ends of each beam. The chancel arch and windows are all Perpendicular. Part of the north aisle has been tastefully developed to provide a modern meeting area in glass, wood and steel.

Fittings include a wonderful effigy of a civilian dated c. 1460, and thought to be that of a lawyer; a Perpendicular font; simple stone sedilia in the chancel; three surviving screens; some mediaeval glass fragments in the top lights of the north aisle windows; and a Royal coat of arms of Charles II. In the tower are two ancient stone heads, and beneath an inscription based on Pepys’ diaries of 1668 referring to the ‘Fair Maids of Foscott’.

The church is clearly well loved: on my visit it was bedecked with flowers in almost every corner.