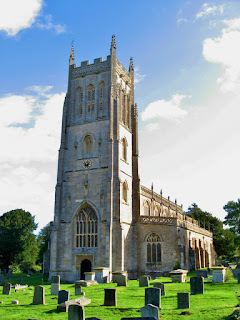 The picturesque village of Bruton has a magnificent late mediaeval church, with an impressive ‘Somerset type’ tower and an unusual Georgian chancel.

There has been a church on the site since Saxon times, replaced by a stone curch in the mediaeval period. This parish church was replaced with a mediaeval stone church, and the crypt and the tower over the north porch date from around 1350. In the mid-15th century a comprehensive rebuilding scheme was begun, beginning with the impressive west tower, which was built 1449-56. The nave was rebuilt a little later, and given a tall clerestory as well as being extended eastwards.

The chancel was rebuilt by Sir Charles Berkeley in 1743 and provides a bright but sympathetic contrast to the mediaeval church. The registers record visits by both Charles I and Charles II.

The west tower is a tour de force, particularly on the path leading up from the town. Of the ‘Wells’ group of towers, which have a strong vertical emphasis, the arrangement of the west window, niches and bell openings delivers a particularly attractive composition.

Inside, the nave has an elegant arcade of Perpendicular arches, with a particularly tall clerestory rising to a magnificent wooden king-post roof, richly decorated with angels, tracery and bosses. The interior is sadly scraped of its plaster and therefore rather gloomy, but details such as stairs to long-vanished roods provide interest. The chancel is a complete contrast; whitewashed throughout with gilded ribs and corbels decorated with cherubs, there is a large classical reredos in place of an east window.

The church has almost an embarrassment of riches in its fittings: Pews with Jacobean bench ends and a Jacobean pulpit; a richly-carved Jacobean west screen dated 1620; 16th and 17th century heraldic glass in the apex of the chancel windows; a fine west window by Clayton and Bell; the colourfully panted Royal Arms of Charles II in the north aisle; the finely preserved tomb chest of Sir Maurice Berkeley (d. 1581) in the chapel, his armoured effigy flanked by his two wives (d. 1559 and 1585) and, opposite, the notable bronze memorial bust of William Godolphin (d. 1636), attributed to Le Seuer (sculptor of the mounted statue of Charles I in Trafalgar Square).

The church has a busy parish life as well as serving the schools of Kings School and Sexey’s Church of England school, and strong links with parish of Bruton in Williamsburg, Virginia.