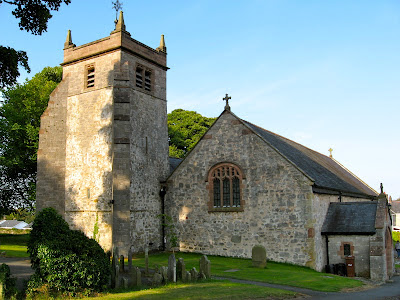 Cilcain has one of Clwyd’s most interesting double-naved churches, best known for the astonishing hammer beam roof decorated with large carvings.

First mentioned in 1291, the church is probably of late 12th or 13th century origin. The oldest part is the north nave, now used as a meeting area. The tower and south nave were added in the 15th century, at which point the windows of the north nave were also renewed in Perpendicular style. The south nave probably replaced an earlier aisle.

The origin of the south nave’s roof is uncertain: the bays do not match those of the arcade, and the scale of the angels implies it was almost certainly intended for a loftier building, but there is little evidence for a local tradition that the roof came from Basingwerk abbey. The north nave was burned down in 1532, possibly during a service of plygain, a Welsh night-long carol service, traditionally lit with large numbers of candles brought by the congregation. It remained roofless until 1746 when it was rebuilt at the expense of the incumbent.

Restoration was carried out in 1786-7, 1845-5 and again in 1889, when the walls were scraped, the south porch rebuilt and the north nave screened off from the south nave. Brickwork at the top of the tower was also replaced with stone.

The main part of the church is now the south nave: the north nave or aisle is not generally open to the public. Immediately the visitor is struck by the stark nature of the scraped walls, which render the interior dark: as one’s eyes grow accustomed to the gloom, the amazing ceiling reveals itself. It is carried alternately on hammer beams and braced arch trusses and moulded throughout.

The beams are decorated by angels each carrying shields depicting the instruments of the passion: roof bosses and the trusses have more carvings, including grotesque faces, animal heads, a pair of monkeys and a delightful pair of men in 15th century secular dress, possible the craftsmen who built it. They stare coyly from with side of a corbelled buttress, like a comedy duo.

To the north, the former Decorated arcade has been filled with wooden glazed panels. The East Window has 16th century glass panels depicting the Crucifixion. Other fittings of interest include a fragmentary Norman font, and a collection 14th century sepulchral panels at the West end, one of which depicts, rather crudely, a lady with an elaborate medieval headdress.