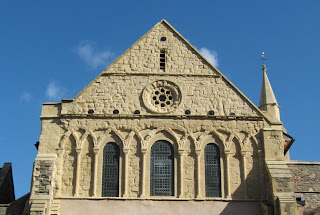 St James's Priory claims to be the oldest building in Bristol. Recently restored, it has well preserved Norman arcades and an early rose window. It is now part of a charitable project offering support to  people struggling with addiction. The church has regular services led by a priest from the nearby Roman Catholic church of St Mary on the Quay.

The Priory was founded as a Benedictine house by Robert, Earl of Gloucester (1100-1147), in 1129. Robert was the illegitimate son of Henry I and a key player in the conflict between King Stephen and the Empress Matilda. He is buried in the church. The church was made parochial in 1374 and the bell tower was erected in 1375, paid for by the parishioners.

The priory continued until the dissolution of the monasteries in the reign of Henry VIII, after which the west end of the Priory Church became the parish church. Alterations included the rebuilding of the south aisle in 1698 and the north aisle in 1864. The church was declared redundant and closed in 1984. In 1993 it was reopened by the Little Brothers of Nazareth, and a project for people in need established. The church was substantially restored in 2009-11.

The west front is in many ways the most interesting: above a rubble wall (now rendered), are a row of Norman interlaced rounded blind arches, surmounted with an unusual (and very early) example of an oculus, or rose window. This consists of a circle surrounded by eight outer circles, with inter-twined rope decoration. At te east end, the rather plain tower forms a prominent landmark from the Haymarket. The south porch (towards the west) has a short tower and is an 18th century addition.

Inside, the nave has arcades of five bays of rounded arches on round columns with attached shafts and cushion capitals, dating from the 12th century, albeit much restored. The roof corbels are in the form of mediaeval heads, brightly painted. The neo-Norman west wall is 19th century as is the inner north aisle of polished pink granite columns (the outer aisle has been separated off to provide exhibition and seminar rooms). The south aisle is more interesting and contains most of the monuments, beneath a row of large 4-light windows and more colourful corbels.

The church has some interesting monuments: pride of place goes to that of Sir Charles Somerset (d. 1598), found through a modern door at the west end of the north aisle. There is a late 12th or early 13th century mediaeval effigy on the south wall under a large moulded arch: well preserved, it is not clear whether this is in fact the tomb of its founder, as claimed on a wall plaque: his tomb of polished jasper was at the east end, which makes it unlikely. Among the numerous 18th and 19th century wall memorials, there is an interesting earlier brass, surrounded by strap-work, commemorating Henry Gibbes (d. 1636) and his family on the east wall.

The church is open during weekdays for private prayer, and there are regular masses.