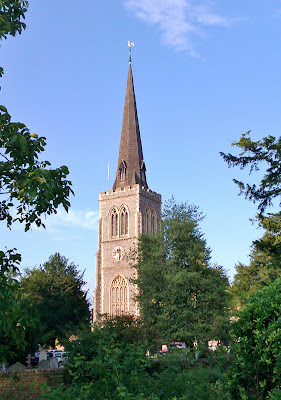 Situated on the edge of Wimbledon village, St Mary’s is the original parish church and has a history dating back to Domesday.

Mentioned in the Domesday book, the original (and probably wooden) church was rebuilt in stone in the 13th century. An 18th century print shows it as a pleasingly rustic building, with a wooden bell turret and spire, but this little church was only 44ft long and 36ft wide.

In the 16th century, Wimbledon became the home of Sir William Cecil, later Lord Burghley, statesman and chief advisor to Elizabeth I. His son Thomas built a manor house adjacent, and in 1626-36 Thomas's third son, Sir Edward Cecil, built the Cecil Chapel as a mortuary chapel.

The church was enlarged in 1786, effectively being rebuilt west of the chancel arch, in a plain but handsome Georgian style. With the arrival of the railway in the 19th century, Wimbledon began to expand rapidly as a suburb and further enlargement of the church was required. Sir George Gilbert Scott was commissioned to undertake the work, which was completed in 1843. He extended the nave, erected the tower and spire, inserted new galleries and completed a new roof, all in the neo-Gothic style. He also encased the earlier Georgian brickwork in knapped flint with stone dressings.

Surrounded by trees, the church's picturesque setting evokes the country rather than the city, and the slender spire which surmounts the west tower is a landmark over Wimbledon Common.

Inside, the aisled nave of 5 bays leads to a two bay chancel. Now whitewashed throughout, it is hard to distinguish the various stages of the building. The oldest parts are the south and east walls of the chancel, which date from the 15th century; the Cecil Chapel survives intact beyond the Warrior Chapel, added in 1920 as a memorial to those who died in the First World War.

Most of the fittings date from the 19th and 20th centuries, but the Cecil Chapel has an intact 15th century stained glass window depicting St George as well as Sir Edward's tomb. A number of other memorials are of interest, one of which survives from 1537; another commemorates Sir Richard Wynn MP (d. 1649), treasurer to Henrietta Maria, wife of Charles I. A modern brass in the chancel commemorates Sir William Wilberforce, the slave trade abolitionist. More interesting memorials crowd the surrounding graveyard.

The church has a busy parish life, with children’s and youth groups and services every day except Monday and Saturday.