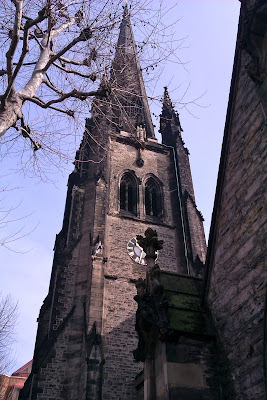 St Stephen's is a lovely church only a few minutes' walk from the bustle of Victoria Street, with an active and diverse congregation.
Built in 1847-49 by Benjamin Ferrey, a pupil of Pugin, it is an accomplished example of Victorian Neo-Gothic in the 13th century Decorated style. The ragstone exterior encloses a cool, largely whitewashed interior. There is an aisled nave of 5 bays, and a long chancel. A small south chapel, dedicated in 1904, was erected in memory of Angela Tennant, daughter of the first Vicar. This has an elaborate decorated scheme of mosaics in the vaguely pre-Raphaelite style.

Other elements of interest include a stained glass window of the Good Shepherd by Morris & Co, designed by Sir Edward Burne-Jones (1890), and an original window of 1850 by Wailes in the south aisle.

The spire was damaged by lightning in the 19th century and again during World War II, and shortened in the 1960s because of the resulting safety concerns. It was restored to its original height by the addition of a lightweight extension in 1994.