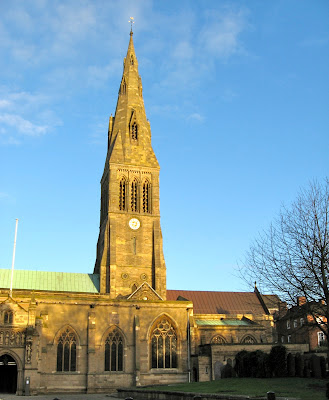 Leicester’s Cathedral was its parish church until the creation of the Diocese of Leicester in 1927. The church has mediaeval elements but was heavily restored in the 19th century.

Leicester was established as a diocese in 680AD by the Saxons, but after 200 years was abandoned as a diocese as the Danes invaded the East Midlands, and was ministered instead from Lincoln and then Peterborough.

The Normans built a church here to replace the Saxon one in the late 11th and early 12th centuries, which was progressively enlarged throughout the mediaeval period: the present nave and aisles date from the mid 13th century, and a large second south aisle (the “Great South Aisle”) was added in the 13th and 14th centuries. The nave was lengthened in the 15th century.

The building was heavily restored 1861-67 by Raphael Brandon, who replaced the original tower and spire with the present version, which rises 220ft. Further restorations were carried out by Street and Pearson, and the south porch added by Bodley in 1897.

The church was elevated to cathedral status in 1927 but, unlike many former parish churches, was not enlarged or rebuilt for the purpose.

Most of the exterior dates from the Victorian rebuilding, but inside the church retains more of a mediaeval feel: the South Aisle in particular, with its large corbel statues depicting people’s ails and discontents, is well preserved. The only remains of the original Norman church of 1086 is a string of billet moulding in the north aisle.

Although not especially well endowed with notable furnishings, the church has a good collection of memorials, the oldest in the main church being that of John Whatton and his two wives, dating from 1656, in the north aisle. A defaced 14th century tombstone – said to be the oldest in Leicestershire – is hidden away in a corridor behind St Dunstan’s chapel. A modern memorial to Richard III lies in the chancel - and there are plans to reinter his recently discovered remains there. St Katherine’s Chapel, beyond the north aisle, has a large collection of memorials to the Herrick family.

The church has a cycle of daily services (details on the website), regular concerts and recitals, and is open daily for prayer and visitors. Guided tours can be arranged on request (advanced notice required).