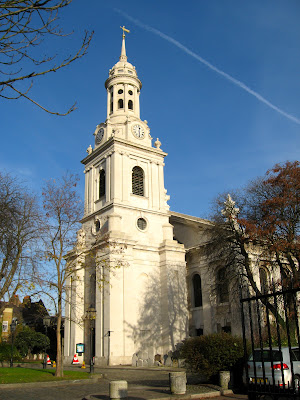 The historic parish church of Greenwich sits imposingly in its town centre. Although unfortunately hemmed in on the east by the main road, both the green at the west end and the interior are oases of calm.
History

The church is built on the alleged site of St Alphege’s martyrdom at the hands of Viking pirates in 1012. Alphege, then Archbishop of Canterbury, had been taken hostage but refused to be ransomed, and so was (by tradition) killed by being pelted with animal bones, before one Viking struck him with an axe to the head to spare his suffering. He was canonized in 1078.

Details of the first church erected on the site after the martyrdom are scanty, but it was an important shrine. A new church was built to replace it in the 13th century, and was witness to many Royal visitors up to the 17th century due to its proximity to the royal palace at Greenwich. Thomas Tallis, the composer, was one of the notable people buried there.

The church roof collapsed in a storm in 1710, and the present church was built to replace it, as the first of the 50 churches sanctioned under the New Churches in London and Westminster Act of 1711. Designed in the Baroque style by Nicholas Hawksmoor, it was completed in 1714 and consecrated in 1718. The intended tower was never built: instead, in 1730, the remains of the old tower were encased to match the rest of the church to designs by John James. Much of the interior woodwork was by Grinling Gibbons.

The church was gutted by incendiary bombs in 1941. Restoration began in 1946 and was completed in 1953. The interior is largely new, but incorporates remnants from the original fabric and is largely faithful to the Hawksmoor's design.

The exterior – particularly the splendid east front (oddly, the original entrance) with its bold Doric portico - is a beautifully balanced example of Baroque architecture, although the proportions of James's tower are unfortunately not a match for the rest.

The interior has galleries on three sides, with delicately carved wooden columns, and the ceiling consists of a huge plaster disc suspended on corbels on the exterior walls. At the west end, the organ is mounted a fine portico of a gallery. Fittings of note include two original benefactor boards on the east wall, impressive ironwork in the east galleries, memorials to James Wolfe and Thomas Tallis, and stained glass depicting other (mostly royal) associations with the church.

The church today is the centre of a bustling parish life, and is the venue for regular concerts. 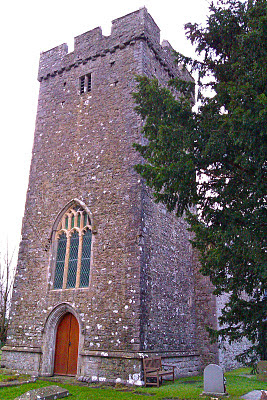 Pretty without being chocolate-boxy, Penmark is a small village near Cardiff, with a good local pub and an interesting mediaeval church. Its peace is only disturbed by the aircraft taking off from nearby Cardiff-Wales airport, but its character could not be more different.
History

The village was the site of a 12th century Norman castle, overlooking a natural ravine carved by the Waycock River. Originally built in wood by Gilbert de Umfraville, it was rebuilt in stone in the 13th century. A good review of the castle (now in ruins) can be found at www.castlewales.com.

The church was probably built around the same time, and its generous proportions may reflect the patronage of the local lord: the oldest part is the chancel arch, dating from around 1200. The tower arch dates from 1400 and most of the windows (some restored) date from the 15th century. All the main elements of the fabric (including the South Porch) are mediaeval. Charles Wesley preached here on 26th July 1777,after breakfasting in near Fonmon Castle. In 1811 the church is recorded as being dedicated to St Mark. Repairs to the roof and walls were undertaken and new seating was installed in 1893-5. The Preaching Cross in the churchyard was restored in 1888, on the original mediaeval steps. The nearby Yew Trees are said to be 300-400 years old.

The church has a south porch, nave, chancel and tower. The most notable interior feature is the peculiar chancel arch, comprising a simple and very crude pointed arch with similarly crude zig-zag carving, dating to around 1200. More impressive is a tall and beautifully proportioned late Gothic tower arch dating from around 1400. The nave has a well preserved staircase for a long-vanished Rood Screen. Most of the windows are perpendicular in style, dating from the later 15th century, some restored.

The church has some interesting fittings and furnishings: pride of place goes to the Jacobean pulpit, from which Charles Wesley preached in 1777. The nave side altar opposite dates from 1709, and above are memorials to Jones family of Fonmon Castle. In the chancel are late 17th century alabaster memorials to the Lewis Family of Penmark Place, with coats of arms and skulls. The nave has a plain turned Norman tub font, presumably dating from the founding of the church.

The church is an integral part of village life - details of special services can be found in the newsletter at www.penmark.org. Regular services are part of the joint benefice of Benefice of Penmark with Llancarfan with Llantrithyd. 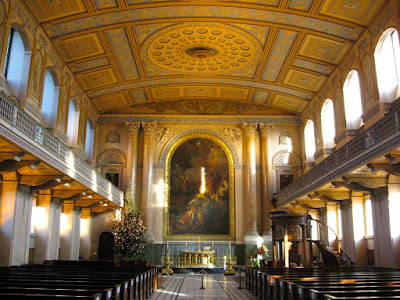 The College’s Chapel of St Peter and St Paul was built as an integral part of the sublime Baroque edifice that is the Royal Naval College at Greenwich. Its dome mirrors that of the Painted Hall opposite, and it has a truly magnificent interior.

The Chapel was completed in 1751, and was the last element of the college to be finished. As designed, it had a rather plain interior with a flat, coffered ceiling, an apse at the east end and plain galleries. Destroyed in a fire in 1779, it was rebuilt but the architect James Stuart designed a new interior in the “Greek Revival” style, for which he was famous. It was reopened in 1789. It is unusual for the fact that the interior is almost entirely unaltered since its rebuilding.

The exterior is part of Wren’s fine Baroque scheme, with the imposing dome rising from a large broken pediment, itself surmounting the long arcade of paired columns which front the old college buildings.

The interior is essentially an oblong box, with narrow galleries supported on brackets which spring from the outer walls. But most striking is Stuart’s Greek revival decorative scheme, executed in plaster in white, pale blue and gold. A mix of classic Greek and Naval motifs decorate the walls, with extensive use of trompe d’oeil painting to add architectural details and statuary. But the most amazing element is the ceiling, which has a perfect neo-classical design of squares and octagons, with wonderfully ornate central ornaments. Its gentle curve gives the chapel excellent acoustics.

Fittings of note include the altarpiece painting by American painter Benjamin West, unusually depicting the wreck of St Paul on Malta; the neo-classical west gallery, which features the extensive use of artificial Coade stone in its decoration; and the memorial in the vestibule to Sir John Franklin and the crews of the ships Erebus and Terror who lost their lives in search of the North West Passage in Canadian waters.

The chapel is open to the public every day and remains an active place of prayer and worship, with a friendly and growing congregation.