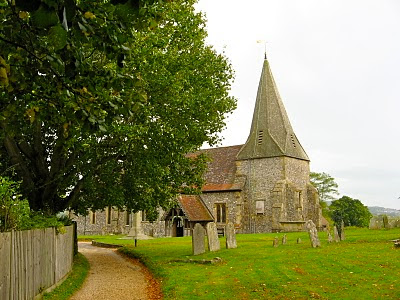 Barcombe is a small, scattered village, which in Victorian times had three mills on the river Ouse. It has an attractive church in a pretty churchyard, a short detour from the Ouse Valley Way long-distance path.

The Domesday book mentions three and a half mills, but no church in Barcombe. However, one must have been begun shortly after, as the nave dates from around 1100. To this were added, in the 13th century, the tower, chancel and a small south chapel. A small south aisle was added around 1400, and also from this time date the tower arch and west and north doorways.

From the exterior, the most notable feature is the tall broach spire, the base of which is actually lower than the nave roof. Inside, the wide arches of the arcade mean that the nave and south aisle work together to feel like a single, unified space. The two arches of the aisle are distinctively different from the smaller, third arch, which opened originally into the south transept.

The only windows of any age are one of the north wall lancets (13th century), and the two- and three-light windows, both of which are from the 15th century. One of these has interesting glass, dated 1657, from Goltho Church in Lincolnshire. There is some glass by Kempe in the south aisle. The font is from the 14th century, and has interesting incised decoration consisting of trefoil lancets and quatrefoils.

The church remains the centre of a vibrant worshipping community, with regular services, and a variety of groups for children.