St Mary and All Saints, Conwy 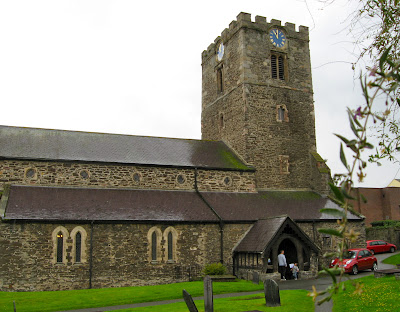 The North Wales town of Conwy is famous for its castle and mediaeval walls, which are among the most complete in the UK. But this World Heritage Site also has a large town church well worth a look, parts of which pre-date Edward I’s castle and walled town.

The church began life as a Cistercian Abbey, founded in 1172 and endowed by the Welsh Prince Llewellyn Fawr (Llewellyn the Great) in 1198. It was plundered by English forces of Henry III in 1245, but after the English conquest of this part of Wales in the 1280s, Edward I moved the abbey to Maenan a few miles away. St Mary’s therefore became the parish church of the new walled town built next to the castle as part of Edward’s conquest strategy. Parts of the walls survive from the 12th century abbey church in the present building.

The tower and chancel were rebuilt around 1300, with the south transept and south aisle following in the early to mid 14th century. The tower was completed in the late 15th century, and the rood screen and font installed around 1500. Some of the windows also date from the 15th-17th centuries. Extensive but relatively sensitive restoration in the late 19th century saw the nave roof and chancel floors both raised, the clerestory windows reset and the south transept window reconstructed.

The church has a west tower, with an aisled nave and south transept. The north aisle is now a memorial chapel. From the outside, the three lancets in the tower and the west doorway, of c. 1235, are of particular interest. The interior is spacious, as befits the town’s importance, with a tall arcade of c. 1300, with carved heads at the join of each arch.

The most impressive feature is the rood screen, one of the best preserved in north Wales, and the adjoining choir stalls, both of around 1500. The stalls are vigorously carved, with figures and decoration resembling pinions and elaborate poppy-heads. The chancel also has some mediaeval floor tiles, now set in a wall next to the impressive arched tomb of Robert Wynne (d. 1598, builder of Plas Mawr house).

Other tombs and memorials include those to John Wynne (d. 1637) and Mary (d. 1585), mother of John Williams, Archbishop of Canterbury in Charles I’s reign (Williams was baptised in the early Tudor Perpendicular font at the west end). A fascinating tomb is that of Nicholas Hookes (d. 1637), who was the 41st child of his father William Hookes, and himself went on to have 27 children. Other items worth looking out for include a window by Burne-Jones in the south aisle, a reproduction of Andrea del Sarto’s ‘Christ’, and a bust of the sculptor John Gibson, who was baptised here in 1790.

The church holds regular services in English and Welsh.