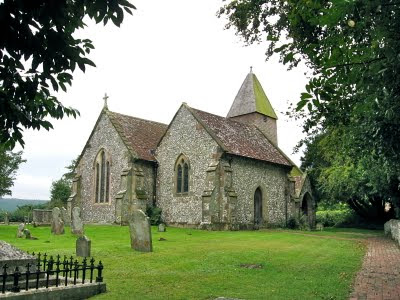 Streat has a small but delightful parish church next to the impressive and historic house of Streat Place.

There has probably been a church on this site since Saxon times, but the core of the present nave (north and west walls) is Norman, probably from the late 12th century. The chancel was added in the 13th century, but extended around 1840-50. The east and south windows also date from this time. A more thorough restoration in 1854 added the south aisle (including the nave arcade) and replaced most of the windows. The porch and vestry were added in 1882. The age of the pretty bell turret is not known, although the church had a bell dated 1520, replaced by three new bells in 1900 when it was found to be cracked.

The interior of the church now has a very Victorian feel, but is delightful nevertheless. Most of the stained glass was added in the 19th century, but the north wall has an interesting depiction of St Francis dating from the 1960s.

There are a number of attractive memorials on the walls, but the most interesting fittings are the two early 18th century iron floor memorial slabs. The larger one, to the Gott family, is reputed to be the largest in England, weighing a ton. There is a also a hatchment with the coats of arms of Charles II, dated 1660, above the chancel arch.

The church is part of a joint parish with Ditchling and Westmeston. All three churches have regular services and are well worth a visit.