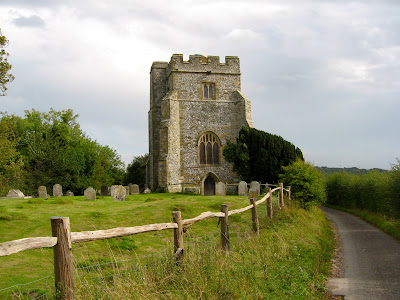 Hamsey is a wonderful place: an inland island (the name is Anglo-Saxon for ‘settlement on the island’) formed by a loop of the River Ouse, north of Lewes, its isolated and unrestored church is hugely atmospheric.
History

The exact origins of Hamsey are obscured by time, but it was important enough in Saxon times for King Athelstan to hold his court there in 925AD, and there is mention of a church in the Domesday Book in 1086. However, the village declined in the late mediaeval period when the population moved west to the nearby village of Offham. Remains of a Manor House were visible near the church until 1777.

The nave and chancel of the present church date from the 12th century, although a number of windows were enlarged as lancets around 1300, when the east window of the chancel was inserted and a north chapel (demolished in the 17th century) was also built. A robust Perpendicular tower was added late in the 14th century, and a porch in the early 15th century.

Hamsey remained the parish church until the middle of the 19th century, by which time the local Vicar was complaining that it was poorly located for the parishioners, who lived mostly in Offham. A new church was built there in 1860, and Hamsey thereafter went into decline, though for a time it was used as a mortuary chapel for the graveyard.

However, plans to demolish it were never carried out, and some people still chose to have their memorials erected in the church. Repairs were undertaken in the 1920s.

The church is principally interesting for the isolated and atmospheric hilltop location, and its unrestored condition. This is how many churches must have felt around 1800, before Victorian restoration and the advent of electricity.

The chancel arch is a simple Norman feature, without ornament; there are small Norman windows in both nave and chancel. The early 14th century three-light east window is particularly attractive. There is a distinctive, low squint between the south side of the nave and chancel, and the 15th century south door was clearly inserted below a much taller 12th century one.

Furnishings of interest include a Perpendicular font; remnants of mediaeval glass in a south window; a fine tomb, to Edward Markwick (d. 1538) in the form of a recessed tomb-chest with cusped quatrefoil decoration, next to the High Altar; and a well preserved decorated piscina.

The walls are crowded with monuments, many dating from after the building of the new church in 1860; those on the chancel’s south wall commemorate the Shiffner family, who lived at nearby Coombe Place. Above the chancel arch are the Royal Arms of George III, and several funeral hatchments adorn the nave walls. The furniture includes some rustic, old pews, which add to the atmosphere.

It now forms part of the parish of Offham; monthly services are held in summer (there is no electricity), as well as occasional concerts, and a popular candlelit Carol service is held in winter.