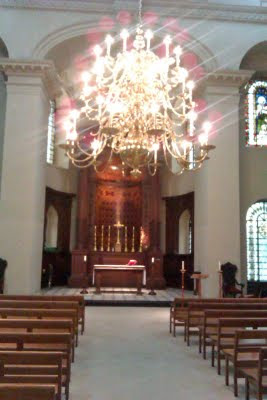 St George’s is regarded by many as one of London’s most elegant churches, and certainly has the most idiosyncratic spire.

History
The church was one of 12 established by the Act of 1711 which set out to build 50 new churches. The architect was Nicholas Hawksmoor, the leading exponent of the English Baroque, and the new church (and his last) was opened in 1730. Soon after, it was re-orientated north-south to accommodate more seating, and additional galleries were added.

For much of its life, it ministered to what was a relatively poor parish with many slum areas, but as the population of the area declined towards the end of the 20th century, it fell into neglect. A major restoration scheme part funded by the World Monuments Fund was completed in 2009, which restored the orientation and interior closer to its original condition.

The church itself is based on a Greek Cross plan, fronted by an impressive Corinithian portico with a light and spacious interior. The steeple is extraordinary: the base has miniature porticoes on each side, and the steep sided roof is topped by a statue of George I in Roman dress, while at the base four lions - one on each corner - represent the ending of the Jacobite rebellion.

The interior has a square nave, with proscenium arches on each side except the east, which has an apsed sanctuary. There are north and south galleries according to Hawksmoor's original plan. The sanctuary contains the original, large classical reredps and altar of inlaid mahogany; other major item of interest is the vast 17th century Dutch chandelier, loaned from the Victoria and Albert museum, which hangs in the centre of the nave.