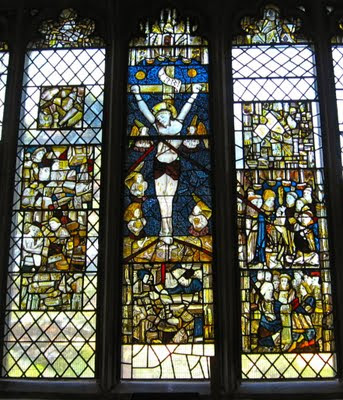 The parish church at Llandyrnog is typical of those in the Vale of Clwyd with a double nave, and has some magnificent mediaeval stained glass.

The church is an ancient foundation, first established by St Tyrnog in the 6th century. He was one of what must have been a formidable family of saints in the area: his brother Deifor established a church at Bodfari and his sister Marchell (Marcella) founded a hermitage and gave rise to the church in Denbigh that bears her name.

The present building dates largely from the 15th century, but was substantially restored in 1876-8 by William Eden Nesfield. It has the typical double-nave plan of the Vale of Clwyd, but the charming timbered porch and pale pink render are Nesfield's. The interior is well maintained and has a number of furnishings of note. The most outstanding of these is the East Window, which dates from about 1490. Re-assembled from fragments which had been hidden (presumably from iconoclasts), it depicts the Crucifixion and the seven sacraments of the church, with saints in the smaller lights above.

Although much of it is missing, the poignant, central figure of the crucified Christ, with streams of blood leading to the scenes of the sacraments, is beautifully preserved. The panels depicting ordination and marriage are also well preserved, whereas those of the last rites (extreme unction) and penance are more fragmentary. The panels depicting the mass, baptism and confirmation have unfortunately been lost.

Other items of interest include an Annunciation window by Kempe; the Coat of Arms of George II, a poor box dated 1687; some lovely Victorian encaustic tiling by Minton; and a stone carving of the head of a monk, rescued from the churchyard, and possibly depicting St Tyrnog himself.

If you wish to visit, a key is available from the nearby Post Office, for private prayer or simply a look around this lovely village church. Service details are on the parish website.