The Collegiate and Parochial Church of St Peter, Ruthin 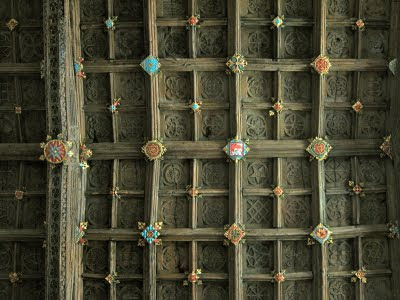 The pretty and historic town of Ruthin has a fine church, part of which dates from the 14th century. It has many interesting memorials dating from the 16th century onwards, and a particularly fine decorated roof from the early 16th century.

The church was built by John de Grey (of Ruthin Castle) in 1310, and founded as a collegiate church with a small community of 7 priests overseen by a Warden (a title still held by the Vicar). After the dissolution, the College was refounded as a grammar school, with the addition of almshouses.

The earliest part of the church is the north aisle (the tower room - now a vestry - was the original choir). The original chancel (demolished in 1663) originally stood east of this, and the cloisters to the north now form part of the old college buildings. The south nave was constructed in the late 14th century, which included the insertion of the fine arcade, with its carved corbels.

The magnificent roofs over the two naves was inserted around 1500-1540, and extensive restorations were carried out in the 18th and 19th centuries, the spire being erected in the 1850s.

On entering, the scale of the double-naved church is immediately apparent. The arcade has interesting carved corbels, one of which may depict a bearded Negro. Apart from the arcade, 14th century details are hidden behind the organ, and outside on the north wall, where the remains of the cloister and priests' dwellings are now part of the Masonic Hall and music rooms.

Back inside, look up, and let you eyes adjust to the gloom; the Tudor roofs over the naves are simply magnificent, containing over 408 carved panels and dozens of painted bosses.

The church also includes some fine memorials: there are rare early Welsh brasses to Edward Goodman (d. 1560), and unusually a separate one for his wife and family on which he appears again. One of their sons, Gabriel Goodman, became Dean of Westminster and chaplain to William Cecil, Elizabeth I's Chief Minister, and founded the grammar school and almshouses. His splendid memorial, complete with life-sized painted bust, overlooks the High Altar. There are a number of other elegant 17th, 18th and 19th century memorials.

The current congregation has an active church life and strong tradition of church music.