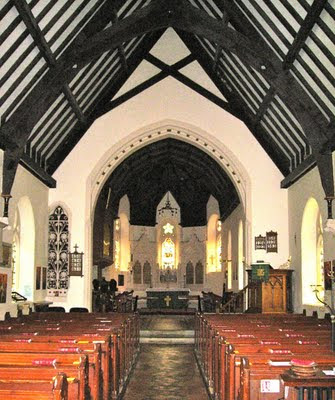 St Peter’s is a tale of two churches: one up the hill, towards the old Llanbedr Hall; and a Victorian replacement in the centre of the village.

The original church on the site of the original village, dates back to at least 1254, when it was mentioned in the Norwich Taxation. A simple, unaisled building, it became a ruin when the new church was erected in 1862-3 in the centre of the new village. The new church was designed by the Shrewsbury architectural firm of Poundley and Walker and was paid for by the Lord of the Manor.

More recently, access to the old church was the subject of a local dispute, resolved only in 2009 when a planning inspector designated the part of the driveway to Llanbedr Hall (from the main road as far as the church) a public right of way.

This is now a roofless ruin, but it was a simple, single-celled building with a bell-cote, which is well preserved. Aside from some Gothic doorways, little else is discernible, as the red sandstone has weathered badly. There are, 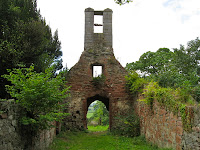 however, a number of memorial tablets in the church, and the graveyard has many tombs and superb views over the Vale of Clwyd.

This is closer to the centre of the present village and has a large porch, single unaisled nave and chancel. The exterior is boldly decorated with bands of coloured stone and coloured roof tiles, some strong carving and it has a particularly vigorous spiked turret.

Inside, the nave is plainer, but has some interesting and attractive Victorian stained glass, and the chancel has good encaustic tiles. There are some wall tablets brought from the old church, as well as an interesting fragment of a 14th carved tomb from the old church, showing a man with curled hair. Recently restored to their rightful place behind the altar are tablets of illuminated-style script with the Creed, Lord’s Prayer and the Ten Commandments in Welsh.

The church is open during daylight hours for prayer and visits, and has regular services in both traditional and modern styles.