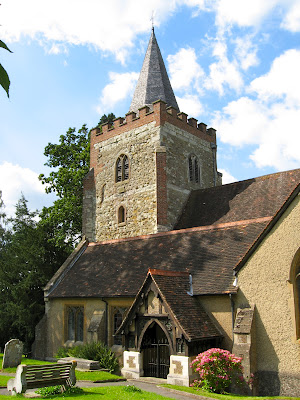 Although there was a church here in Saxon times, the present church dates largely from rebuilding in the 13th and 14th centuries: the North aisle was inserted around 1230, and the chancel rebuilt at the same time, and extended early in the 14th century. The south transept and splendid tower are later 15th century work. The south aisle was erected in 1882, to match the north aisle. The interior is whitewashed, but the Victorians scrubbed the chancel back to the stonework: here the 13th century lancets and simple decorated windows with trefoiled heads have survived best.

The furnishings are of interest: the font, although bearing a date of 1665, but the bowl is actually a classic 15th century perpendicular Gothic design, and was rescued and brought back into the church around this time after being thrown out earlier by the Puritans. The chancel screen is particularly fine, with a series of perpendicular arches decorated with trefoils and quaterfoils, and is largely 15th century; also from this century is the piscina in the chancel. Fragments of 15th century glass remain in the north aisle window, including a fine St George killing the dragon. The pulpit incorporates some fine Tudor linen-fold panels.

The south aisle has a number of relocated tomb niches, and in the chancel is the tomb of Sire Thomas de Fulham, the rector who undertook the 14th century expansion. Adjacent is a charming and well preserved 15th century brass to William Grafton and his wife, Joan, in clerical dress, dated 1465. On the north wall of the chancel is a chalk panelled tablet to Charles Gillman, son of Anthony Gillman of Reigate, (d. 13th April 1631), with a shield bearing a leg, booted and spurred.

Finally, the Pre-raphaelite glass in the East Window is worth a special mention: showing the angelic host at worship in Heaven, it was designed by Edward Burne Jones. The dark pink wings of the angels caused a huge furore amongst some of the Victorian congregation, who left in disgust and founded a new church nearby.