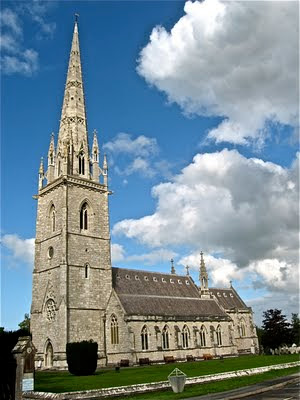 St Margaret’s is one of Wales’s outstanding Victorian churches, known locally as ‘The Marble Church’ because of the profusion of marble used in its interior decoration.

The church was built to designs by John Gibson, pupil of Sir Charles Barry, and paid for by Lady Margaret Willoughby de Broke in memory of her husband, Henry Lord Willoughby de Broke. Lady Margaret was the daughter of Sir John Williams, Baronet of Bodelwyddan, and returned to Bodelwyddan after the death of her husband, determined to create a separate parish for Bodelwyddan from neighbouring St Asaph. The cost was the then phenomenal sum of £60,000. The foundation stone was laid on the 24th July 1856; and the new church was consecrated by the Bishop of St. Asaph on the 23rd August 1860.

Executed in a florid Decorated Gothic style, the church is dominated by the spire, which rises over 200ft. The exterior is dazzling white, thanks to the use of the local limestone, and is a familiar landmark alongside the A55, which unfortunately runs all too close by.

Inside, the plan is an aisled nave with a large chancel, the arcade columns composed of the deep red marble which give the church its name. More marble decorates the chancel, which is lined with stalls, as in a cathedral, with heavily decorated canopies with ogee arches. Capital, corbels and arches throughout are elaborately carved, as are the tall oak roofs. The guide book states that fourteen varieties of marble are used in the church.

The furnishings are similarly lavish; the rather intimidating eagle lectern is supported on a thick and heavily carved column, intended to represent a crag; similarly, the pulpit is heavily carved, with images of Christ and the four Gospel Saints. The font in Carrara marble depicts two young sisters holding a shell, and is rather sentimental to modern eyes. The stained glass is by O’Connor and T F Curtis, with a single window attributed to Burne-Jones.