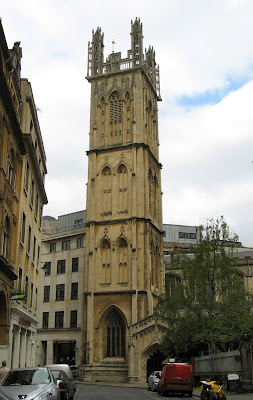 This is a large and well preserved 15th century town church, filled with monuments, with an impressive tower, quiet churchyard and a small modern cafe.
History

Although there has been a church on the site since the 11th century, the present structure dates from a comprehensive rebuilding in the late 15th century. The tower and East window were the gift of John Shipward, Mayor of Bristol (d. 1473). The clerestory was repaired after a storm in 1703, and the aisle and east window repaired in 1873. It now has an active ministry to the City Centre, with innovative, modern forms of worship.

The most impressive external feature is the tower. This is 152ft high, of an elaborate Perpendicular Somerset design, but with a lavish Gloucester style crown with complex open tracery, decorated with pinnacles and gargoyles. The main church has aisles to the nave of seven bays, but no crossing, with large Perpendicular windows in both aisles and clerestory.

The church has many impressive monuments: on the north wall is a tomb chest with effigies and statuettes in ogee niches, to Edmund Blanket (d. 1371), a clothier and wool merchant. Also on the north wall is one to Martin Pring (d. 1627), who explored the coast of what is now Massachusetts, Maine and New Hampshire. This is an elaborate and colourful affair, decorated with allegorical figures, urns, a mermaid and merman, an hour-glass, scythes and anchors.

There is a large collection of monuments and memorials by the door to the cafe at the east end of the south aisle. Two are of particular note: the huge and colourful tomb of Sir George Snygge (d. 1617), complete with life-sized semi-reclining effigy beneath a large strap-work cartouche with columns either side. On the south wall is the rather humbler but attractive memorial to Robert Kitchin (d. 1594) and his wife; in the form of an engraved brass plaque, it shows them facing each other in prayer, attended by their three sons and three daughters, with a delightful poem below:

Robert Kitchin, Alderman, and his wife,
Lieth neere this place, closed in earth and clay,
Their charities alike in death and life,
Who to the poor gave all their goodes away,
Leaving in trust such men to act the same,
Who might with truth perfor(m) their good intent,
So that the poore indeed and (m)eke in name,
To lasting ages in this Citie meant,
And other places of this Kingdom faire,
As Kendall towne and Stuckland Field both have,
With Bathe the native place of her first ayre,
The bountie of their guyftes they to them gave.