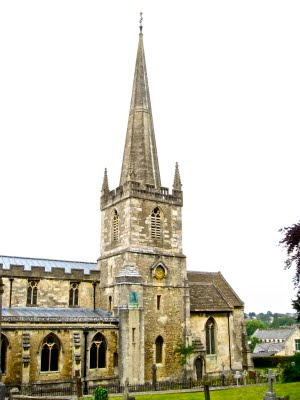 Frome’s large parish church – fitting for a town that was as large than Bath until 1650 - lies a short distance up a hill from the town centre. From the outside, much of what the visitor sees is Victorian, but inside are substantial elements from a complex mediaeval building.
History

The church was founded around 685AD by St Aldhelm, Abbot of Malmesbury, and this Saxon building survived until the Norman period. It was replaced late in the late 12th century, and fragments of the new Romanesque church can be found in the present fabric.

Around 1300, the nave was replaced, and the lower stages of the tower were built. The nave was extended late in the 14th century (or early 15th), and the northern transept rebuilt and the tower completed. In addition, chantry chapels added to the east of the tower (around 1412) and to the west of the north transept (1517).

The two approaches to the church could not be more different: from the end of King Street and Cheap Street, a series of steep steps rises alongside a stone wall with sculpted stations of the cross, forming a processional way (or Via Crucis) to the North door; to the west a spacious forecourt is closed off from Bath Street by a five arched screen, designed in 1814 by Jeffry Wyatt.

Once inside, one is struck by the scale of the building, and particularly by the long nave. Here, the division between the earlier and later 14th century parts is clear in the design of the arcades. Both the clerestory and the rather intrusive sculpted roundels are Victorian.

The north chantry chapel is entered through a fine panelled arch. This is now a baptistery and, besides the font, contains many wall monuments. An attractive round-arched doorway with continuous mouldings (ie no capitals) from the Norman church opens into the north transept. Another Norman fragment is the round-headed piscina on the north wall of the chancel. Architecturally, the ornate Victorian chancel is less interesting than the south chantry chapel and the room beneath the tower, both of which have elaborate rere arches.

The church has many interesting furnishings. In the baptistery chapel are a 13th font in the shape of a quatrefoil, with four shafts; fragments of 15th century stained glass and an unusual wall monument to Richard Stevens (d. 1796), depicting an urn with two orphan boys on one side and an elderly man the other, with an asylum in the distance.

The north transept has more 18th and 19th century monuments, but more unusual is the large table tomb with a cadaver underneath, to a member of the Leversedge family. The elaborate rood screen is by Kempe, and the reredos in the chancel (of Carrara marble) by the prolific sculptor, James Forsyth (1826-1910), beneath an East Window by Clayton & Bell.

Finally, in the tower room opposite are two fragments of Saxon sculpture, depicting a monster and interlaced carving. The accompanying description postulates that they may have been from a cross, one of several erected where St Aldhelm’s funeral procession stopped as it moved to Malmesbury for burial. It admits there is no evidence for such a claim but says, ‘we at St John’s like to think it is a reasonable assumption’.
St John's Parish Church, Bath Street, Frome BA11 1PL
Posted by David J at 23:46